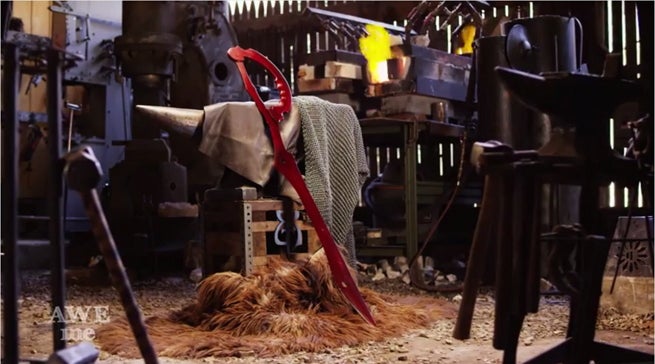 Kill la Kill has become one of the most popular and well received anime of the past several years. One of the most distinct and recognizable elements of the series is Ryuko Matoi’s scissor blade, a scissor-shaped longsword that can magically transform into different shapes.

That sounds like the kind of weapon that could only exist in animation, but the team at Master at Arms: Reforged were challenged by their fans to recreate the blade in real life, and they did not disappoint. In fact, they took the theme one step further, by forging the scissor blade out of melted down scissors.

As you can see in the video below, the final result is pretty impressive. Obviously it can’t change into all of the magically enhanced forms that you see in the show, but it is able to extend mechanically.

Kill la Kill was simulcast via streaming services like Crunchyroll and Hulu during its initial release in Japan, and will begin airing as part Adult Swim’s Toonami block on February 7. The first volume of the series’ manga adaptation is expected to release in the United States later in 2015.

Disney+: Every New Movie and TV Show Arriving in November 2020