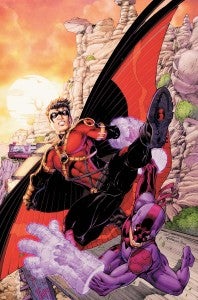 In spite of artist Brett Booth taking some heat over his redesigns of Wonder Girl and Superboy, the Red Robin design he used on this week's Teen Titans #1 was met with broad approval from comics fans on the Internet.

But what would Bruce Wayne think?

Thanks to our friends over at Cracked, I stumbled across an Elseworlds one-shot called Batman: Knight Gallery, which was meant to be the personal sketch diary of Batman, trying to come up with new costume concepts for himself and Robin. What Cracked had on their site was pretty hilarious, but Batman's repeated emphasis that Robin having a "winged" look to his cape was impractical and silly (as opposed to his own bat-wing cape) caught my eye in light of the new DC Universe and Red Robin's redesign.

The wings, of course, are a bit different in the new DC Universe than they were in the Knight Gallery sketches, mostly because they've been depicted as functional; in the first issue (out this week), Tim Drake uses them to glide/fly away from attackers and then to deflect heavy-caliber bullets. That said, Batman's cape has at times been depicted as able to do the same things, in spite of its looking like just cloth. 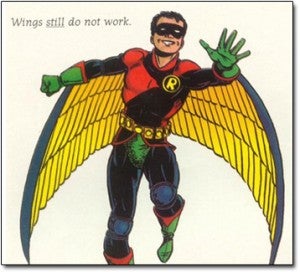 Brett Booth, the penciller on the series who was responsible for many of the character redesigns (as well as for designing some entirely new characters called for by Scott Lobdell's scripts), was nice enough to comment on the images from Knight Gallery for me and how they do or don't apply to the new Teen Titans (not to be confused with The New Teen Titans, which is an entirely different thing).

"The first image looks more like a birds wing and more feather like than the second. But in reality a human can't flap like a bird can," Booth said. "They don't have the strength to do, the pectoral muscles would need to take up the whole torso. So using them as actual wings is impossible unless you have spider man like strength. Visual wise, well they don't really strike fear into the hearts of men." entirely different thing).

I can see what he means--and also, the way this image is drawn it looks like Robin's cape is attached all the way up and down his arms. That leads to some of those Dollar Bill (from Watchmen) or Booster Gold-type of situations.

Addressing the difference between this image and the one that Tim ultimately landed on in Teen Titans, Booth said, "Feathers are a tough thing, replicating them so they aren't really feminine is tricky, especially on a male character. If they are just for show then you have a bit more freedom but if they are there for a purpose, then they have to reflect that." 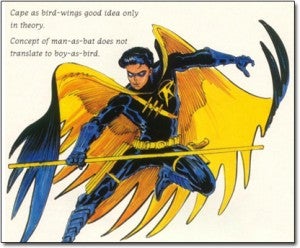 "With the large cut outs on the second image, he could really couldn't glide, they are too long and narrow and would just flop around cutting into the surface area so he's just fall. Smaller notches would 'probably' work better (not an expert on gliding wings but know a few things.) I like the second image, but I think a cowl would work even better."

So there you have it, fashionistas! Bruce Wayne may have dismissed this concept out of hand after a few ineffective scribbles in his diary (which I prefer to think he keeps under his bat-pillow at night), but Tim Drake apparently didn't get the memo, and the result is a bird-themed costume that looks more bird-themed and less silly than anything this side of Hawk & Dove.

Red Robin's Wings: Do They "Work"?