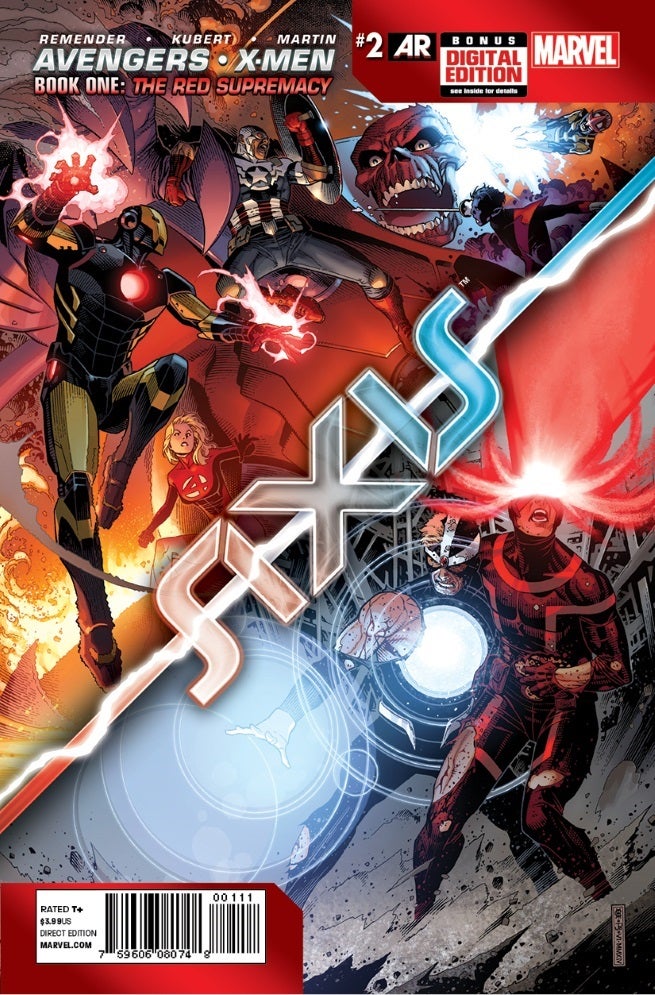 Axis #2 is more of the same. There's no significant difference between what happens here and in the first issue of the series. The Red Skull continues to be an overwhelming threat. Heroes continue to fall while attempting to combat his nefarious plan. The momentum continues to move in the exact same direction, at least until the very last page.

That creates a two-fold problem. First, nothing new happens in this issue. Drama comes from reversals and changes. Shifts in momentum build a story, but these two issues have continued to move in the same direction. More heroes arrive and are then defeated. Whatever effect this had when the Red Skull batted down heroes in the opening pages of the series is experiencing significantly diminishing returns. When a small group is presented as being the last hope of defeating the Red Skull, it feels no more desperate than the battle that came before.

Second, all of the flaws of the previoius issue continue to affect the quality of the story. The drama that is present within this series is grafted on from other series and previous events. Alex Summers relationship with his brother Scott and wife Janet are emphasized, but without the context of Uncanny Avengers their dialogue and actions land with little impact. Some shorthand could go a long way in investing value in these moments, but they are presented only as climaxes of ongoing stories. There is an expectation that readers will appreciate what is occurring without providing a reason.

The stakes of the series continue to be big, but entirely non-specific. There are mentions of worldwide war and the loss of heroes. These stakes are big, vague nouns. The world and humanity are at stake, but there's no attachment to these impersonal ideas. What is needed is investment in characters. The risk of a single character who readers care about can mean significantly more than the potential loss of a fictional world.

Adam Kubert's compositions continue to fit the epic scale that Rick Remender has created for this story. Red Skull in his Onslaught form towers over the field of battle and strikes sufficiently frightening poses. The pacing of this semi-weekly series has already begun to show in his work though. While the larger panels and big moments are given sufficient effort to breathe and be enjoyed, smaller moments often feel rushed. Kubert's ink work is lacking, specifically in panels focused on dialogue. Faces are often left without depth or detail.

The last page presents the first significant shift in momentum of the series thus far and a reason to anticipate Axis #3. This series was marketed with a set of interesting hooks to alter the status quo and allow for some intriguing stories. That promise is finally being realized and may allow Remender to still make Axis an event worth reading.

However, this issue carries the multiple problems of its predecessor and, refusing to alter its course, reads like a continuation of an already unimpressive comic. Change may never be permanent in superhero comics, but that doesn't mean it cannot occur within individual stories. Change is the lifeblood of drama and the quicker Axis focuses on altering the status quo, no matter how temporary it may be, the better the series will be.