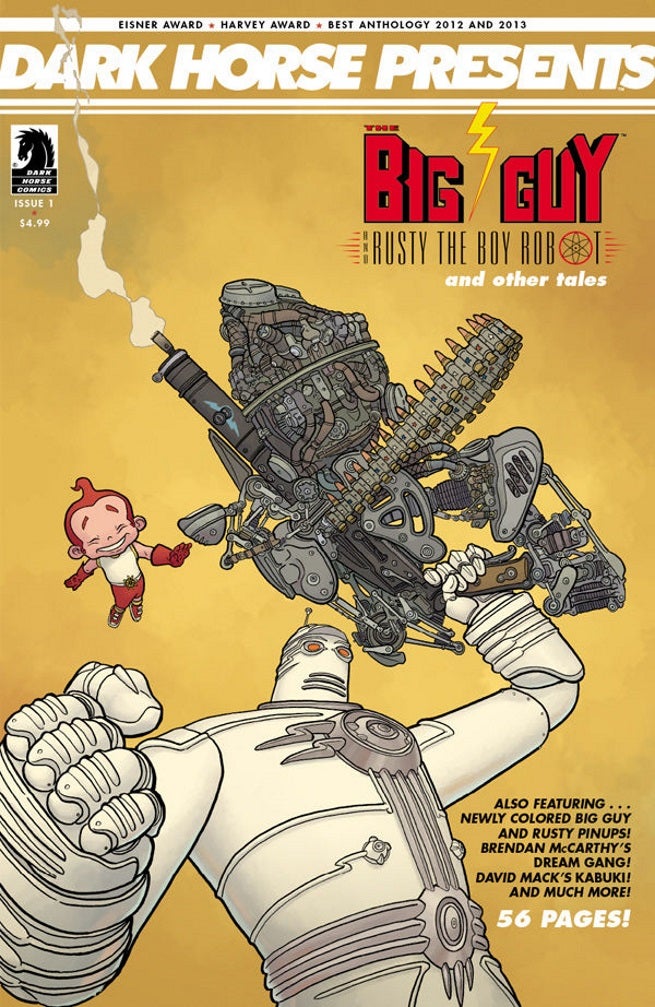 Anthology series are tough to review. At their best, they represent a wide array of talent telling a variety of different stories. That diversity results in lots of high and low points. Even in the best anthologies, readers are bound to find some comics they love and others they would rather skip. And Dark Horse Presents has been one of the best anthologies in comics for the past twenty years.

It succeeds in assembling both a diverse array of talented storytellers and stories, a snapshot of Western comics. That makes it impossible to discuss as a single title though. So here's a few quick glimpses at what Dark Horse Presents #1 has to present.

The Big Guy and Rusty the Boy Robot

Story and art by Geof Darrow

There's a reason this is the first comic featured and on the cover. It's really darn good. Frank Miller and Geof Darrow originally created these characters, but Darrow is flying solo on this story. The story features the titular robots squaring off against a kaiju-like monster threatening beach goers on the Fourth of July. Darrow has an extensively detailed style that serves this battle very well. The monster feels truly monstrous. It's not the only monster present though. The crowd on the beach is grotesque in its own way, portrayed as the worst stereotypes of Americans imaginable. Detailed with guns, beer cans, tattoos, and a general look of disinterest, they make for a revolting lot. The images of apathetic crowds mix nicely with pun-heavy dialogue to create a story that's equal parts action-packed and humorous. Darrow isn't quite alone though. He has Dave Stewart and Pete Doherty along, providing colors and letters respectively. With their help this comic is an artistic slam-dunk. Even if you're not a fan of the puns, you'll be salivating at the eye candy.

Kabuki could be referred to as eye candy as well, but its style couldn't be more different. David Mack's work is dream-like and difficult to define, using a multi-media approach. Pictures, paints, and pencils overlap to form some beautiful pages. The art is gorgeous, but is not conducive to clear storytelling. The mysterious nature of the plot and lack of definition create a mood much better than a narrative. Like Big Guy and Rusty, Kabuki is an extension of a larger story. Unlike it, readers unfamiliar with that narrative won't be able to access this one.

Art and lettering by Steve Parkhouse

This debut may please fans of conspiratorial science fiction. Featuring an alien with the personality of a good-natured con man, it introduces readers to his ill-conceived attempts to make money and fly under the radar. It's a well-executed introduction that sets up the protagonist and the central conflicts. I can't say much more about it than that though. Steve Parkhouse's line work serves the story well, but he is never provided much of an opportunity to do anything interesting. The story itself is written well enough, but no particular element leaps out as being new or innovative. It is only the first chapter and has plenty of interesting directions to grow, but this installment is nothing special.

Story and art by Brendan McCarthy

Whereas Resident Alien didn't provide much room for the visuals to potentially hook readers, Dream Gang never lacks for interesting panels. Primarily set in a dream, it takes advantage of its surreal concept to toy with backgrounds and characters. Psychedelic images are introduced on almost every page. Dream cops, far out monsters, and sentient towers are all well designed and the most enjoyable elements of this comic. Although the colors play to the strangeness of the setting, the constant exposure of bright hues can wear out the eye. Hot pinks and glowing yellows become the new normal without something to contrast them against. These colors are effective as a border to the story though, filling the bleed. The story itself isn't particularly enticing. I can recall all of Brendan McCarthy's designs and some of his imposing panels now, but the names of his characters and their goals escape me.

Of the three first chapters in this collection, Wrestling with Demons is the best. Artist Andy Kuhn isn't given very much to play with until the final page of this story, but he makes the most of each panel. He establishes the characters through their body language while crafting an appropriately eerie ghost town behind them. The interactions between father and daughter feel real here. John Rauch's colors help to create a great atmosphere as well. Shallow browns help to bring the Southwest to life, while his darkening sky adds to the tension and horror of the story. Jimmy Palmiotti and Justin Gray provide an excellent script. Just like Kuhn's body language, their spoken language feels natural and gives readers a reason to invest in both characters. Of the three ongoing stories, this is the one I am most excited to read next month.

Story and lettering by Damon Gentry

Sabertooth Swordsman serves as a perfect bookend to this volume, capturing a similar tone and style to Big Guy and Rusty, but brought to life by Aaron Conley, a comics newcomer, alongside Damon Gentry and Joseph Bergin III. Although Conley is strongly influenced by Darrow, and perhaps Ulises Farinas, his work stands out on its own strengths. This story is entirely silent, although I did not recognize that fact until a second reading. There are some growls and sound effects, but Conley relies almost entirely on the visual language of comics to tell this story. He does so perfectly.  Panel transitions are directed by actions and momentum. At no point is there any confusion about what is occurring or how to read a given page. Even in a spread that looks like Billy from Family Circus dropped acid, it's clear what is happening. Add in some flair for sight gags and booby traps, and you've got an impressive, funny comic. The visual storytelling is so good that you may forget some comics use words too.

All six of these stories are sold for $4.99, as much as many comics that contain half as many pages. The first and final stories alone justify the price of admission for me, but I'm sure that experience will vary for everyone who picks this up. The only thing I can guarantee is that you are bound to find something you like here, and potentially discover something new. That's the beauty of anthologies like Dark Horse Presents; there are comics for everybody.