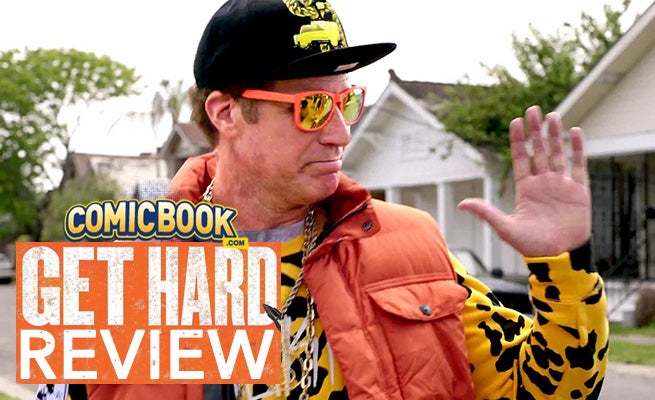 Get Hard stars Will Ferrell as James, an oblivious hedge fund manager who, despite his oblivious nature, is incredibly wealthy and successful working for his fiance Alissa's (Alison Brie) father Martin (Craig T. Nelson). Meanwhile, Darnell (Kevin Hart) makes his living at Hollywood Luxury Bubbles, where he washes cars that belong to the rich folks of Beverly Hills.

One day, James' bubble pops and he has to start experiencing what the rest of the world lives like. He is framed for laundering and embezzling money and faces 10 years in prison but first is granted 30 days to get his affairs in order. Terrified of getting beaten and raped in prison, he thinks he needs to get toughened up for prison.

Darnell needs $30,000 to send his daughter to a private school. He's never been to prison, but when James approaches him asking for prison training, Darnell can't turn down the money. Much like his character from January's The Wedding Ringer, Hart's Darnell puts on an act for money. At one point, he even remasters the story of Boys In The Hood, putting himself in the story to keep James convinced that he has been to prison, when really he doesn't even know how to hold a shank.

Once their deal is established, Darnell researches prison life and does his best simulate uncomfortable, terrifying scenarios, one of which is a "yard" scene where Darnell acts like three different inmates at the same time and allows Hart to shine with the energy we know he has. Otherwise, for most of the film, it's one of Hart's more subdued performances, likely because Ferrell's comedy style was overwhelming.

The number of racist, genital, and homosexual jokes can be overwhelming to those who are even remotely easily offended. I always laughed with Chappelle's Show, which packed a lot of offensive jokes into it's three seasons, but even I found the film to be a little in-your-face at times. A prime example is the opening credits that split the screen several times between super rich and super poor, on one side showing someone driving a Ferrari while the other side shows someone picking from a trash can. Truth is, maybe it just feels "in your face" because it's an issue we typically try to turn our cheeks to. We signed up to go laugh and got a few serious messages with it.

Ultimately, the movie tries to send a heart-felt message of friendship and family but that's not what you're going to be thinking about leaving the theater. You'll be recounting the laughs you just shared with your buddies because if you're willing to pay to see it, chances are the trailer told you that this is the kind of comedy you enjoy. Just beware, it is more of Ferrell's Anchorman humor than it is Hart's Ride Along or Think Like A Man. Ferrell's style overwhelms Hart's. While I usually get most of my laughs during a Kevin Hart film from his enthusiasm and energy in delivery (which in a few scenes shines through), all in all this is a Will Ferrell movie, not a Kevin Hart movie.

Having two scene stealing comedians is definitely an advantage for writers or directors and the two had a few moments that will split your sides. Whether it's Hart using a television remote to jab Ferrell and saying, "Stab, stab, stab!" and Ferrell subtly whispering (probably improv), "I'm dead," or just Ferrell's face taking screen, reciting different trash-talk phrases for Darnell, there's a couple moments of humor capable of making the person in front of you wear your popcorn and soda.

Bottom Line: Get Hard features the type of jokes you'd expect from a title that's an innuendo itself. The outrageous laughs almost make the plot unimportant but ultimately fit the style Ferrell is known for. 6.8/10

REVIEW: Get Hard Is More Ferrell Than Hart