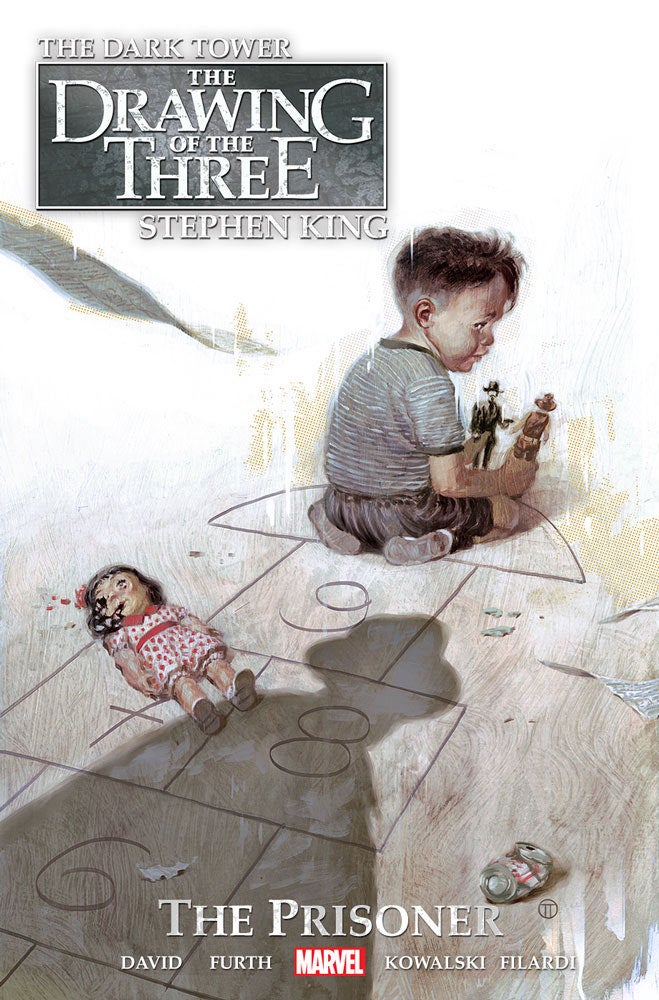 After too long of a hiatus, the journey to the Dark Tower resumes with the release of The Prisoner. While the first several arcs of the comics were based off of the first Stephen King book, The Gunslinger, the series is now taking its cues from the second Dark Tower novel, The Drawing of the Three. And much like the novels that inspired the comics, if the fantastical, psuedo-western tone of the series so far hasn't been your style, don't let that preclude you from giving The Prisoner a chance.

Without abandoning everything that's come before, The Prisoner heads out completely in its own direction. It's an urban horror story dressed in the trappings of a crime story. The subject matter has changed as well. We're no longer in some faraway world, we're in 1960s Brooklyn with little boys and their action figures, little girls playing hopscotch, and hardened criminals performing unspeakable acts.

Everything has been overhauled. The melancholy narration, done in the voice of new protagonist Eddie Dean, feels modern and immediately engaging. The future voice of the narration also works to enhance the dialogue of the "present" dialogue. It takes the mundane and makes it ominous and keeps the reader in a state of dread even before the inevitable horror begins.

The first issue is short on plot movement, but makes up for it with atmosphere. Piotr Kowalski and Nick Filardi come together to make a world that feels like ours, but with a crooked sneer. The lines are sharp and the orange and purple color pallet is stunning.

Those are the reasons for the uninitiated to get involved. For long time Dark Tower fans, Robin Furth and Peter David have been playing in this universe for a while, and they have a great handle on the material. Nods to the Dixie Pig and "Lost Dog" signs are great touches and, for people who know who Eddie Dean becomes, The Prisoner promises to tell an original story that will add a lot of depth to a character we already know and love.

As I said, there's not too much plot movement in this first chapter. As such, we don't feel like we leave the book knowing much more than we do at the start. The story decompression costs the first issue of The Prisoner some points, but the fact that the last page just leaves us wanting more could just as easily be a back-handed compliment for a series that's off to a very promising start.

REVIEW: The Dark Tower: The Drawing Of The Three - The Prisoner #1