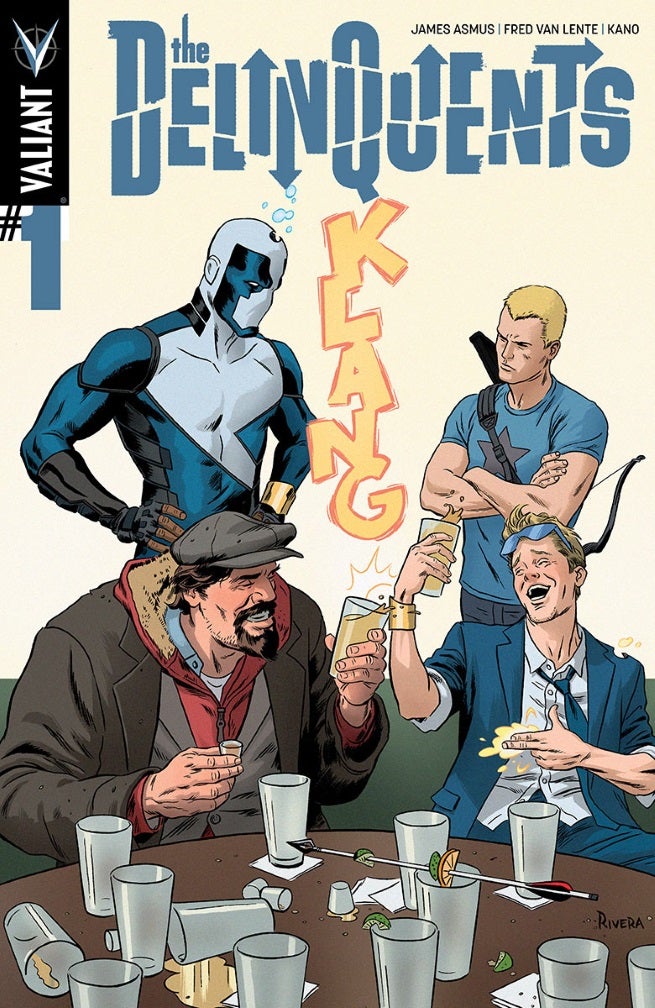 Superhero crossovers and events receive a lot of flack, much of it well deserved. Mini-series and issues that feature two popular characters or teams getting together generally boost sales. The result is more crossovers that are created by corporate mandate, not storytelling need. That negative connotation is worth considering when reading The Delinquents #1, because it defies all expectations.

The Delinquents #1 is fun, witty, well written, and, perhaps most importantly, feels like a story that its creators want to tell.

The issue opens with an intro sequence that feels cinematic in nature. The opening pages introduce a slightly vulgar MacGuffin, and then track it through the years in a pair of sixteen panel grids. Small captions, like "Valiant Proudly Presents" with the word proudly scribbled over, introduce the creative team before opening on the modern day. It's the dense layout of these two pages and the clear sense of visual storytelling from artist Kano that first establishes this comic as being something different from the typical superhero fare.

Kano's flare for page design is present throughout the issue. High panel counts and non-typical reading patterns reveal Kano's understanding of the comics medium. On one page he pulls the eye from right-to-left and from bottom-to-top, defying reader's instincts to do the exact opposite as they follow the characters of Quantum and Woody. His showmanship is not self-indulgent though. His unique panel compositions are always used to service the story. Two pages mid-way through the comic mirror one another in design with each displaying one member of the Archer and Armstrong team in a fight. Readers who are unfamiliar with these characters will be clued into their personalities. The two opposing silhouettes alone provide more characterization than several paragraphs of exposition could.

That accessibility is another surprising strength of this issue. Rather than provide a long recap page or load the story with exposition, James Asmus and Fred Van Lente opt to tell a story that can stand on its own narrative strength. The introductory sequence serves to introduce both a shared goal and antagonist. So when the two pairs of heroes are introduced, they are pulled naturally into an ongoing narrative. Found in media res working as bounty hunters and bouncers, both pairs are characterized by their actions, dialogue, and visual presentation. Some stranger elements, like a goat with laser vision, may leave new readers scratching their head. There's nothing present that will prevent any reader from enjoying this introductory romp though.

The combined efforts of Asmus and Van Lente, writers of Quantum and Woody and Archer and Armstrong respectively, serve to maintain a sense of continuity for existing fans though. The voices and tone from both series can be felt here, but that is to be expected from writers who are already handling the characters. They are creating new characters and plot lines as well. However they are splitting or combining the writing duties, it is working very well. The entire comic reads as a cohesive story told by an equally cohesive team.

The main reason this particular team up succeeds is because they share two central strengths: comedy and character. Although the two duos are very different, both of their series are steeped in comedy. The humor comes through on every page. Van Lente's knack for political satire shines through early on in a parody of Monsanto, the third most hated corporation in America. The scene balances commentary with madcap humor, allowing it to be smart without alienating some of its audience. Much of the humor comes through the two central relationships of the comic. Both of the heroic duos are odd couples and their dynamics make for a wide range of great laugh out loud moments.

Laughs, action, great characters, and gorgeous art, The Delinquents #1 has everything you might want from a superhero crossover. The level of craftsmanship and love present in every page of the comic show that Kano, Van Lente, and Asmus care about the story they're telling. This isn't your typical crossover; it's a darn good comic.

Review: The Delinquents #1 Has Fun, Wit, Comedy And Character