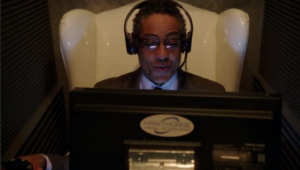 NBC's cult sensation Community, about to begin in its fourth and possibly final season, will bring back Gilbert Lawson, Pierce (Chevy Chase)'s half-brother played by Breaking Bad's Giancarlo Esposito, TV Line reports. While NBC will reportedly not confirm details of his appearance, or even that Esposito is set to return, TV Line has consistently been on the inside with Community producers and is unlikely to be bearing false witness against one of their favorite shows. TV Line suggests that Esposito is set to reprise his role in an early episode in the fourth season, and that it may be the one in which viewers finally get to see the inside of Pierce's cavernous and eccentric mansion. Community returns to NBC on Friday, October 19, at 8:30 p.m. EST.

Velma Massively Popular Despite So Many Negative Reviews

The Expanse Collectibles Coming from Nacelle

Harry Potter Star Not Ruling Out a Possible Return

Hajime no Ippo's Creator Knows How The Series Will End