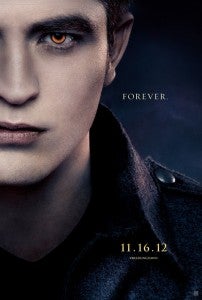 It seems as though fans using the Twitter hashtag #PattinsonisnotFinnick over the weekend were getting themselves all worked up over nothing but typical Hollywood rumor-mongering; the Twilight star was never offered a role in The Hunger Games sequel Chasing Fire, and only even heard the rumors himself when he was approached by people who wanted to know whether it was true or not.

According to a USA Today  interview with the star, currently bouncing around promoting his new film Cosmopolis with A History of Violence director David Cronenberg, it was simply never going to happen.

"I was kind of curious for a second. So I called my agent,” Pattinson, said in the interview, and then continues, "My agent was like, 'No...no one's going to offer you that part."

That's a fairly flat denial, if we've ever heard one. Even Pattinson joked that his agent was overly harsh with him in delivering the (non-) news.

Robert Pattinson Was Never Going to Be In Catching Fire