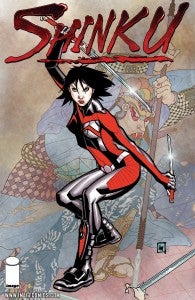 With the fifth issue finally just being released in late October and a trade paperback out Wednesday to collect that first arc, writer Ron Marz and artist Lee Moder's Shinku seems to be back on track after a long hiatus between issues.

The story, which follows the last surviving member of a samurai clan dedicated to hunting a rival gang of Japanese vampires, was one of the best new series introduced in 2011 and the lack of movement on it through most of 2012 was disappointing. Still, each issue that came out has been more fascinating and beautiful than the one before it, leaving a general sense that while the comic might not be out as frequently as we'd like, it's worth the wait.

Will that wait be a bit less in the future? We spoke with Marz about the series's past, its future and what it's like to try and win back your own fans.

This is a SPOILER-FILLED conversation. Catch up on the series here before reading on.

Five issues is arguably a shorter-than-usual arc, considering that the Big Two seem to use six as a standard. Was Shinku always planned to be a five-issue arc or did the delays play into it?

No, we were always planning for each collection to be five issues. Sometimes you'll see four issues collected into a trade paperback, but I think that really ends up being too slim a volume. We went for five issues because that seemed the right length for this arc, it allowed us to get the collection out a little sooner, and it allowed us to have a good chunk of "DVD extras" in the book.

It certainly can't hurt that doing so keeps the production cost down, so the trade paperback can cost a little less and still make some money.

Well, everyone on the creative team is working for free already, so it wasn't really a question of production costs. But, collecting five issues, rather than six does give you the opportunity to keep the cover price down a little bit more.

It's really too bad you didn't have the opportunity to put undies-wearing Shinku on the cover of #5 - That probably would have driven a lot of interest!

Honestly, that cover with Shinku attacking the vampires under the temple bell was actually completed before we knew where the climactic battle was going to take place. Lee Moder drew that image, and then I thought, "that bell has to be a big part of the climax."

How did Asano figure out that Davis is of such strategic importance? Did I forget something?

Asano and his vampires have obviously been keeping tabs on Davis, realizing that someone with his expertise could pose a threat to them. Hence the attempt on his life in issue #1, which is how he's introduced to Shinku. 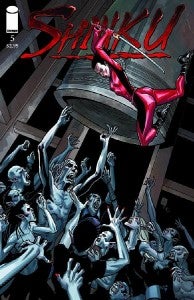 I feel like througout the series, but especially in #5, there are some sequences that are more "cinematic" than most comics manage. The piece where Asano is having his monologue and Shinku is taking out the guards feels very much like something out of a film of TV show, in terms of pacing. Was that intentional?

Definitely intentional. I think Lee and I both approach pages with a cinematic sensibility. First and foremost, I want the stories to be visual, rather than a bunch of talking heads, so we try to figure out the best way to do that. And the obvious factor is that Lee is just really damn good. We came up with the sequence in issue #5 together, Lee executed it, and then Mike Atiyeh's color choices were brilliant.

That asked, and you can tell me no comment and I won't even print the question, any movement on getting Shinku optioned?

Nothing official yet. There's been discussion and interest, but nothing's signed. We're hopeful. We do the comic because we love the comic, but an option would certainly help the comic live a longer life.

As the series has gone, we're seeing more and more monstrous vampires. Is that just a question of finding them at home, or because Shinku has killed most of the ones who are still more human-looking?

There's actually a transformational aspect to the vampires. When they feed, or when they attack, essentially when they give in to their baser instincts, they take on a more monstrous form.

The finale of the first arc, as I said, really felt cinematic and it definitely calls for a sequel, but everyting, including #6, is currently on a TBD release date on the Image website. Any idea when the next arc will be along?

Issue #6 is actually done, we're just waiting on the last few pages of colors for that, and Lee has continued along. After the health-related delays that we've experienced, we want to be prudent in terms of releasing the coming issues, so we don't put ourselves behind again. Issue #6 should be out soon, and then #7 early next year.

We just spoke to Todd & Craig about The Perhapanauts the other day, and to Josh Elder about Mail Order Ninja. One of the consistent themes is that it's very difficult to bring your readership back, let alone grow it, after a long delay or a hiatus. You've been around comics for a long time and have been pretty successful just about everywhere you've gone; what do you think is the key to making a book like Shinku succeed?

Once you lose momentum, it's hard to get it back. It's hard to get back the trust of the readers and retailers. But this is a different situation than work-for-hire gigs, where there's a paycheck attached to it. I think the best thing you can do is produce the best book you can possibly make. Hopefully quality wins out, and people come back for it.

The long-term sales for a lot of books, Shinku included, are in the collected edition. There will be people picking up Shinku Volume 1 this week for whom the single-issue delays are meaningless. They're just picking up the trade paperback when it's available. 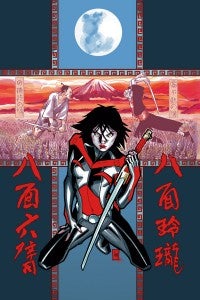 You and Lee have done a number of smaller and mid-sized shows, too; is that really helpful, just in terms of hand-selling books at a show where you guys are some of the bigger names on the floor?

You know, we really don't do that many shows, it's just been a spate of them in the last two months or so. Going to shows and meeting the fans is great, but doing too many of them interferes with finishing the actual work. I just did moderately-sized shows in Elmira and Albany because they were close, and I do shows like Baltimore and Emerald City in Seattle and Heroes Con in Carolina because they're very comics-oriented shows. Now that there's a Shinku collection to promote, you'll probably see Lee and I do a few more shows, because I think you can win a lot of converts hand-selling the material.

Stejpan Sejic and I will have an original graphic novel out called Ravine in February. It's a fantasy OGN, and that will be much the same situation. You'll see me and hopefully Stejpan at a few shows, so we can get some eyes on the book. When you're doing creator-owned material, this is part of the bargain. You're responsible for being your own best advocate.

Ron Marz on the Return of Shinku