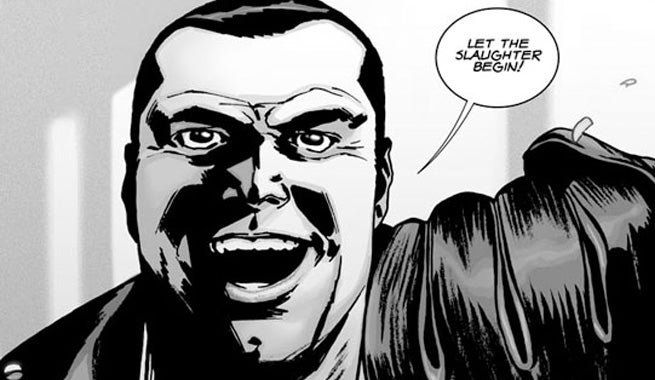 Rumors have taken the Internet by storm this week following a Tweet from Deadwood and Justified actor, Garret Dillahunt.

Dillahunt tweeted a photo of The Walking Dead's Compendium Three, in which Negan is introduced, saying he's reading it, "Just cause." This sparked the curiosity of many suspecting him to have been cast as Negan. See it below.

Reading material for the day: @TheWalkingDead Just cause. pic.twitter.com/AIvktnk3XX

Sure, anybody could tweet that but as The Spoiling Dead Fans noticed, John Carroll Lynch, who played Eastman is last week's Morgan-centric episode, and Alanna Masterson, who plays Tara, both followed Dillahunt on Twitter recently. Still not buying it? So did The Walking Dead showrunner, Scott Gimple, who only follows 301 people, many of whom are cast members of the AMC series and recently include Michael Traynor (Nicholas) and Xander Berkeley who was cast in an unnamed role.

On top of that, Dillahunt kept the cryptic hints alive with the tweet below.

The original tweet went out on Wednesday. Before running a report, we decided to do some investigating and a source at AMC has told us that as far as they know, Garret Dillahunt has not been cast on The Walking Dead.

Dillahunt's recent Instagram also seems to clear things up a bit. His efforts on Twitter and Instagram seem to more like an effort to get fans pulling for him to play the part, rather than actually having been cast.

Closer. Bloody crew cut in the woods. Who do I look like? #makemycase #lobbying #demandit

If any official news breaks regarding Dillahunt, rest assured, we'll have it for you.

Rumors Swirl About Negan Casting On The Walking Dead