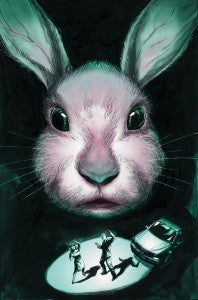 In a new interview promoting his prose novel London Calling, comics writer Paul Cornell suggested that his recently-cancelled Vertigo series Saucer Country might come back for a "second season" as early as February 2014.

“We haven’t signed contracts yet but I have every reason to believe we will be starting season two in comic form next year,” Cornell told Suicide Girls. “In February, even. We’ve been talking to some lovely people about this and I think Saucer Country readers have a huge reason to be hopeful. I’m very much thankful to them for that. The sudden cancellation meant that I had to wrap things up really quickly, far too quickly to actually wrap the whole comic up....The only way I could have finished the whole thing in two issues would have been in a lecture hall with a series of diagrams and charts going so that meant that and this meant this.”

It's not immediately clear whether Cornell will pick up again with Vertigo, which seems the most likely scenario, or attempt to take the property elsewhere; while Vertigo titles are technically creator-owned, there are restrictions in the contracts that generally prevent someone just picking up and moving. Still, DC has been willing to accommodate creators in the past; when former WildStorm title The Boys was cancelled, they allowed Garth Ennis and Darick Robertson to take it to Dynamite, where it prospered for many years.