It's less than a month until the release of Savage Dragon #192, the issue in which everything is going to change.

It seems likely, from previous interviews creator Erik Larsen has given and from the cover of the issue coming out this month, that the title character will actually die. Even if he doesn't, we know that the series will officially be handed over to his son, Malcolm, who has been slowly built up as the lead in this series for nearly four years now, since his father's apparent death in Savage Dragon #150.

After Dragon came back, though (long story—isn't it always?), he took the spotlight back somewhat—including fulfilling the decades-in-the-making promise to fight a war that's been teased since his earliest appearances with Vanguard. Along the way, he spent some time in space, leading his people (along the way he finally learned his own origin and reconnected with the race who had abandoned him back when he was a ruthless dictator, a life that had been removed from his brain before he was deposited on earth, where he was found in that fiery first page.

But it seems that bringing Dragon back into the title was never intended as a long-term solution and that there's a good chance Larsen might finally kill the character he created in elementary school in order to remove the temptation to keep telling more stories around him.

So—with Dragon's last issue as the official lead of the series coming soon, what issues should you read to get a basic overview of the Life and Times of Savage Dragon? ComicBook.com spoke with Larsen and series editor Gavin Higginbotham (who, as ever, did most of the work) and came up with a list... 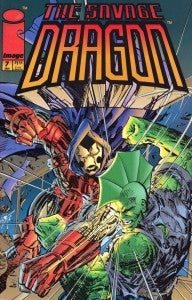 This is an issue that many fans may have thought about recently when Dragon got the crap kicked out of him in a prison brawl with Mako. Rarely has Dragon been so utterly mangled as he was in his first big dust-up with Overlord.

The beating, the blasting and of course the iconic impalement actually serve to raise the question: how in heck does Larsen plan to actually kill Dragon, if that is indeed his plan? It's difficult to imagine a way he hasn't yet been abused. Savage Dragon #21

He may have gotten the best of Dragon a year and a half or so before, but this issue ends with Overlord's death – cementing the fact that Dragon's arch-enemies don't stick around, like you'd expect in most superhero books.

That didn't mean the final end of the Overlord identity, of course--it's a suit of armor and, like Iron Man, it can be passed along from wearer to wearer depending on the circumstances—but Larsen always made sure that each new Overlord had to be brought in, and come into possession of the armor, in an organic way for the story. It was never just “Hey, look, Overlord's back!” Most people who die in this book stay that way. Savage Dragon #31 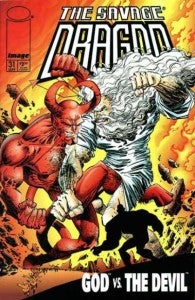 If the launch of Image, the positive reviews and the write-ups for ultra-violence hadn't gotten Savage Dragon on the map yet by the time this issue came out, there was nobody interested in comics who didn't know about the book that had a knock-down, drag-out fight between God and the Devil, with the hero watching and the incredibly memorable splash page declaring “Don't f—k with God.”

This issue also gave us a glimpse at Dragon's vision of the afterlife—what Heaven will be like for him when and if he's gone at the end of this month. It's a glimpse that's key to the plausibility of his actual death, since Larsen once told me in a podcast interview that he anticipated that as Dragon's happily ever after—the panel that would see him off.

We also get to see Overlord's soul in Hell, cementing the fact that, yes, he's really gone. 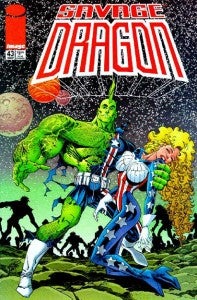 From his earliest appearances, Dragon was a cop with the Chicago PD. It wasn't always an easy relationship, but it was his equivalent of the Daily Planet. It gave him a status quo, a supporting cast, a day job and all those other things that superheroes need to maintain a life outside of superheroing. Here, though, we see Dragon off the force, and a new edict from Larsen: no status quo other than "no status quo." Savage Dragon #43

This issue featured the death of Rapture, once again underscoring the sense that no one in the book is truly safe—even Dragon, Larsen has pointed out time and time again over the years.

Since Rapture was also the mother of Malcolm, Dragon's biological son, her death led to the eventuality that Dragon would be a single father—even if Angel hadn't come into the picture. 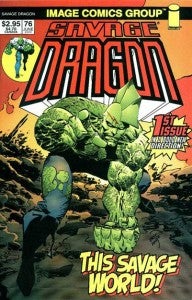 Savage Dragon #75 was touted as the end of an era and the beginning of a jumping-on point for new readers and a new beginning for Dragon—which certainly turned out to be true. Issue #76 saw the launch of This Savage World, arguably the series' most high-profile story since its launch and one of the iconic arcs for Dragon as a character.

For years, nobody knew what Savage Dragon's backstory was. This is where the whole “alien” thing came in.

At the time of his discovery, there wasn't really a way of finding out what he was—a freak, an alien, or what. There wasn't evidence, or any technology available in the Image Universe to try and reverse-engineer how he ended up where he was. Dragon just kind of stepped into the life that was handed to him because what else are you going to do? Torture yourself about it? 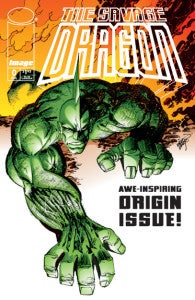 Readers, too, were told essentially that sometimes not everything has a nice, easy answer. Except that when Image did a tenth anniversary hardcover featuring work by the company's founders, Larsen's contribution posed a bit of a challenge.

After all, Larsen was still writing and drawing Savage Dragon on a monthly basis, whereas all of the other guys had moved on. A Todd McFarlane Spawn story was in and of itself a bit of an event, whereas putting Larsen on a Savage Dragon story just meant he had more to draw that month. So how to make it special?

And good thing he did—over the next decade or so, the Emperor Kurr story presented in the Image Hardcover and reprinted in Savage Dragon #0 would become a key element of Dragon's future.

With a return to the Chicago Police Department, this was billed as a return to the pre-Savage World status quo for Dragon in many ways—and that was, of course, a ruse. The comfort zone crafted throughout most of the issue by bringing back the tropes of the earliest days of Dragon were dashed entirely by issue's end, as a bomb ripped through the station, killing a number of supporting characters, including Frank Darling—Dragon's best friend and biggest advocate on the force.

Five issues later, Dragon would begin a spiral of chaotic and unpredictable story developments that would ultimately bring us to #192 and the end of his run as the title character. 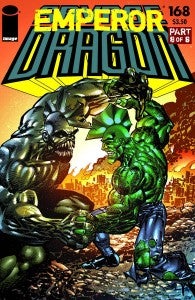 Check out my full commentary track for the issue here.

This is the “fall of Savage Dragon,” as Larsen put it when recommending this issue for the list. As the Emperor Dragon story ends, Dragon manages to pull humanity's salvation out of his rear end using time-travel and the will to kill himself.

It's not enough, though, and he's considered such a threat to the world that he must be removed from it. His “death” is a ruse, but his actual fate—stranger and with promise of a new status quo but ultimately short-lived—wasn't definitive enough to keep him away and Savage Dragon #169, nominally the first issue where Malcolm and Angel were the leads, was a bit of a false start as a result.

Larsen told me at the time, “We all knew this day would eventually come and I’m excited to do a book starring Malcolm and Angel. I have a ton of stories to tell and a lot of characters to introduce. In a way it’s like Invincible where the star is living in the shadow of his famous father. In a way it’s Spider-Man where he’s suddenly forced to cope without a parent. But unlike both, Malcolm has a support group. He lives with a family–he has a step sister and he’s living with a woman that had a son so there’s that dynamic–plus there are none of the secret identity trappings so it’s its own thing at the same time. It’s kind of fun because it’s a new book but at the same time an old one and all of the villains and other supporting characters are there. It’s a new challenge and I can’t wait to face it!”

Of course, not all of that support network is there for him this time around...! 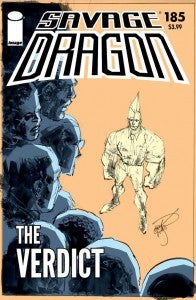 Check out our full commentary track for the issue here.

The trial of the Savage Dragon bucked the expectations of such a story and delivered a conviction—and a death sentence—even though Dragon was technically not in control of his body during the events of Emperor Dragon.

Part of that related to the judge being on the take, but just as much of it was the fact that Dragon's lawyers could not convince a jury that there wasn't a chance Kurr could take over the body again and become a threat to everyone on the planet.

“At a certain point it all just becomes too much,” Larsen said at the time. “You add up all of the carnage and dead bodies and all of the times he’s caused both and it becomes overwhelming.”

Savage Dragon: Ten Key Issues To Read Before The End