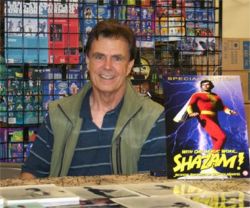 With news about the upcoming Shazam movie heating up, we couldn't help but think about the classic seventies Shazam Saturday morning live action TV series. The series ran for three fun-filled seasons. Jackson Bostwick played Captain Marvel in the first season, and John Davey took over the cape for the second and third seasons. Last year, Comicbook.com ran into Jackson Bostwick at a Nashville comic convention. Even though the series originally ran thirty years ago, Shazam is far from forgotten. There are also many new fans that have watched the show either on TV Land or DVD. We recently contacted Jackson Bostwick to get his thoughts on the new Shazam movie, and he granted us this exclusive interview. It turns out that the original Captain Marvel has been keeping quite busy with directing a movie of his own and writing a book about his experiences on the Shazam TV series. Comicbook.com: Have you heard about the Shazam movie that is in the works? Bostwick: Yes. I have been aware that a Shazam movie entitled, "Billy Batson and the Legend of Shazam" is being prepped. Comicbook.com: What are your thoughts on the Shazam movie? Should it be a comedy or should they play it serious? Bostwick: I hope that it will be done as it was intended by the Golden Age comic creators at Fawcett Publications ... seriously fun, but not comedically silly (ala TV's lame attempt at BATMAN). Comicbook.com: Are you hoping to have some type of role in the Shazam movie? (For example, like how Lou Ferrigno played a guard in the Hulk movie). Bostwick: Naturally, I would hope to appear in the film and do my best to contribute what I can towards it being a huge success. But, of course, the extent of my participation, if any, is entirely in the hands of the powers that be. Comicbook.com: According to your bio, you became good friends with Shazam artist and creator C.C. Beck. Can you tell us more about your friendship with him? Bostwick: C.C. and I began a great friendship, starting with a meeting at a comic convention in Dallas in 1975, and continuing until his death. We exchanged letters discussing the show, his love for the character, Captain Marvel, and his being put off with some of the comics of the day. He was a real pleasure to be around, and I will always remember his gusto for life and the pure delight he had in meeting with the fans. He once told me that my portrayal of CM was as close to his original intent for the Good Captain as he could have wanted. That was a tremendous compliment from the man who had been in on, and responsible for, the creation of one of my own personal childhood heroes -- Captain Marvel. Comicbook.com: You've professed to growing up a comic book reader. Do you still read comic books, and if so, what are your favorite comics? Bostwick: I still read SHAZAM! and some of the Golden Age comics, when I can find them -- WHIZ, CAPTAIN MARVEL, PLASTIC MAN, THE PHANTOM, TARZAN, THE LONE RANGER, STRAIGHT ARROW, BUGS BUNNY, SUPERMAN, and DICK TRACY, among others. Like C.C., I'm not into many of the current and more graphic publications being offered, today. Comicbook.com: You also appeared in the original Tron. Will you have any part in the Tron remake? Bostwick: Again, as a performer, I would certainly want to have a part in the film, but that will depend on those in charge. Comicbook.com: Why were you only on the first season of Shazam? Why not the second and third seasons? Bostwick: I was unceremoniously dismissed on the pretense that I was holding up production because I was holding out for more money. HAH! I had in fact injured myself doing a take off (I have it all on film) and was at the doctors office getting treatment the next morning for a busted blood vessel under my eye. (I go into detail -- with pictures -- in my forthcoming book, "Myth, Magic and a Mortal.") The wind up is: we won an arbitration and Filmation had to pay for all the shows they had me set for plus residuals. Bottom line: they killed the show! Comicbook.com: Any tidbits you can share with us from the book? Bostwick: As mentioned above, the book is entitled, "Myth, Magic, and a Mortal." It's a great read with tons of photos and has a lot of insights about the show and the shenanigans that went on behind the scenes. One tidbit concerns the incident where I saved the camera operator from being sucked into a rock crusher while filming s gag at a plant in San Pedro. Comicbook.com: What current projects are you working on? Bostwick: I am currently editing a film I wrote and directed called, "Bloody Mary-Lite (an urban faerie tale)." It is dark comedy based on the Bloody Mary urban legend. You can check the teaser out at my website www.jacksonbostwick.com Comicbook.com: Any thing else that you would like to say to your fans? Bostwick: I would like to say a huge THANKS for the kind words and support that you've so generously afforded me over the years since the show. I'm not through yet, folks. I hope to be able to entertain and see and thank as many of you as I can in my future projects and personal appearances. SHAZAM!