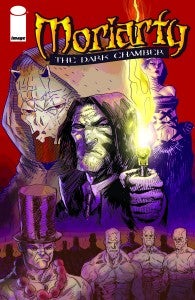 Sherlock Holmes has been in the limelight for well over a century now, and was responsible for the first wave of fandom as we know it today. He has been realized in many different media, including film, TV, animation, comics, stage plays, etc. I myself have dipped into the legend by co-creating the Moriarty comic series with Anthony Diecidue for Image Comics.

There has been a new wave of Sherlock-mania these past few years. We've seen the big-budget films starring Robert Downey, Jr. and Jude Law. We've also seen the much-loved Sherlock series by Moffat and Gatiss that brings the sleuth into present day. And soon, CBS will be entering the fray with their own present-day take, titled Elementary.

You're an informed audience, I'm sure, but I'd like to at least attempt to clue you in on a few notable Sherlock adaptations that you may have either missed, or haven't thought about in a while. Anyway, a here's few that I like (not an exhaustive list).

1. The Great Mouse Detective 1986 Many credited Directors and Writers (see IMDb) Based on the novel "Basil of Baker Street" by Eve Titus and Paul Galdone

Yes, it's a cartoon about a mouse. But, to be fair, I didn't lay out any strict guidelines for this list. And you'd be hard-pressed to say this isn't a Sherlock adaptation.

OK, so the main character isn't Sherlock Holmes, per se, but a mouse by the name of Basil of Baker Street, who lives in Sherlock's apartment and is exactly like Sherlock. He and his faithful, also-mouse sidekick Dr. Dawson solve mysteries together. Enter Professor Ratigan (yeah, you're catching on), wonderfully voiced by the legendary Vincent Price. With evil tidings afoot, Basil and Dawson spring into action to save the mouse world's version of the British monarchy from being overthrown.

The thing about The Great Mouse Detective that really stands out in my mind is the climactic chase scene that takes place on the face of Big Ben. Watching this as a kid, it was every bit as nail-biting to me as Alan Arkin dragging his way across the floor with a butcher knife after poor Audrey Hepburn at the end of Wait Until Dark. Professor Ratigan goes absolutely crazy evil, clawing at Basil as he hangs from the hands of Big Ben in the rain, and they fall into the mist...I'm not going to ruin it. But if you haven't seen it, well, you should.

I know, I know. We're just playing fast and loose with this thing, here. But stick with me. It's Data and Geordi as Holmes and Watson on the holodeck, and they meet up with Holmes' greatest nemesis, Professor Moriarty. Scratch that, Data's greatest nemesis. Geordi mistakenly tells the computer to create a villain capable of defeating Data, not Holmes. So the result is one of the best depictions of Moriarty you'll ever see: a man in conflict, struggling with the nature of his existence, and capable of taking down the Enterprise.

Moriarty is beautifully portrayed by Daniel Davis (incidentally, a native of Arkansas), who gives us a well-rounded portrait of the master villain. I daresay he served as a great inspiration for me and Anthony as we created our MORIARTY series.

A humorous take, this one sees Ben Kingsley as a genius Watson and Michael Caine as a dim-witted Sherlock. The basic premise is that Watson is an author, famous for writing fictional Sherlock stories. Tired of just writing about mystery, Watson hires an actor, Caine, to play Sherlock so they can tackle cases together. Hilarity ensues.

My favorite thing about this movie is that Moriarty is played by Paul Freeman, who is best-known for playing big-time baddie Belloq in Raiders of the Lost Ark. My two favorite cinematic villains, together as one.

I don't have official data on this, but "Baskervilles" is probably the most famous Sherlock tale, and has been adapted more times than any other. The version I'm speaking of here is notable because it was produced by Hammer Studios, and starred Peter Cushing as Sherlock Holmes

For those that aren't familiar with Hammer, they were a British studio that produced a legion of horror movies that frequently employed the likes of Cushing and Christopher Lee. The macabre and gothic feel of Hammer's films would go on to influence the work of Tim Burton, whose Sleepy Hollow is said to be a direct homage to Hammer's signature style.

Hammer had planned to do a series of Sherlock films, but the reception of this initial take was not well-received, and was particularly disliked by the Doyle family. So no others were produced.

Personally, I think Cushing was a great Holmes (even looks like him), and the way this film amps up the horror elements of the Baskerville tale is quite fun. I highly recommend.

Anybody reading this probably already knows about Jeremy Brett, but I had to take a moment to mention him. He is, to many, the greatest Sherlock of all time. Brett portrayed the detective in a British television series produced by Granada Television starting in 1984. The series, initially titled The Adventures of Sherlock Holmes, is regarded by many to be  the most faithful Holmes adaptation ever.

Three of my favorite episodes are as follows:

There are many other great adaptations, many other great actors and filmmakers that have tackled the Holmes question. These are just the first that come to mind, either for their originality or brilliance of execution. I should be cited for not discussing The Seven-Percent Solution or The Private Life of Sherlock Holmes, and certainly flogged for not mentioning Basil Rathbone. But we'll have to leave those for another time.

If you have a personal favorite Sherlock adaptation, do tell.

Daniel Corey is a director, screenwriter, playwright, and novelist.  He has authored screenplays, teleplays, stage plays, two comic series, and a novel.

In 2007, Daniel created DANGERKATT CREATIVE STUDIO, a company that serves as an umbrella for all of his creative endeavors. His first graphic novel PROPHET, a collaboration with artist Anthony Diecidue, was released in April 2009.  Current projects include the comic series MORIARTY, released by IMAGE COMICS beginning in May 2011.