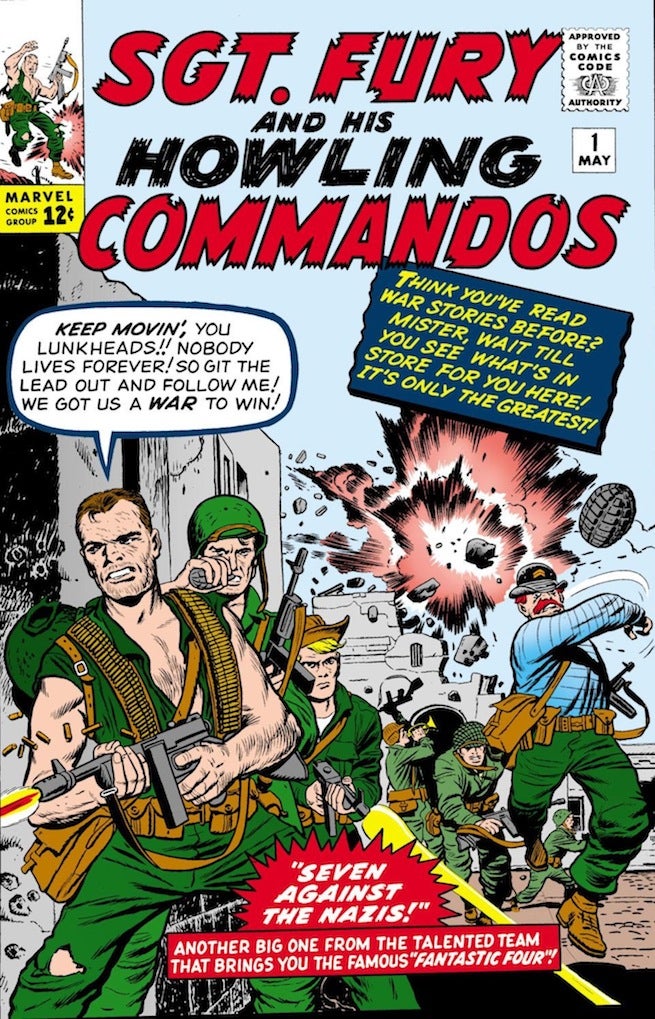 For our next installment of Silver Age Silliness – the list feature that both celebrates and playfully mocks some of the silliest moments in comics during the Silver Age era – we travel to the front lines of World War II with Sgt. Fury and His Howling Commandos.

That's right, before Nick Fury was an eyepatch-wearing super-spy, he was the leader of a group of misfits soldiers who caused nothing but heartache for the Axis powers. Created by Stan Lee, Jack Kirby and Dick Ayers, these guys, which included future S.H.I.E.L.D. characters like Dum Dum Dugan and Gabriel Jones, waa-hooed their way across Germany and Japan, changing history along the way. The series also introduced such mainstay Marvel villains as Baron von Strucker and Baron Zemo.

So let's take a look back at the first 20 issues or so of Sgt. Fury and have a laugh at some of these absurd moments. 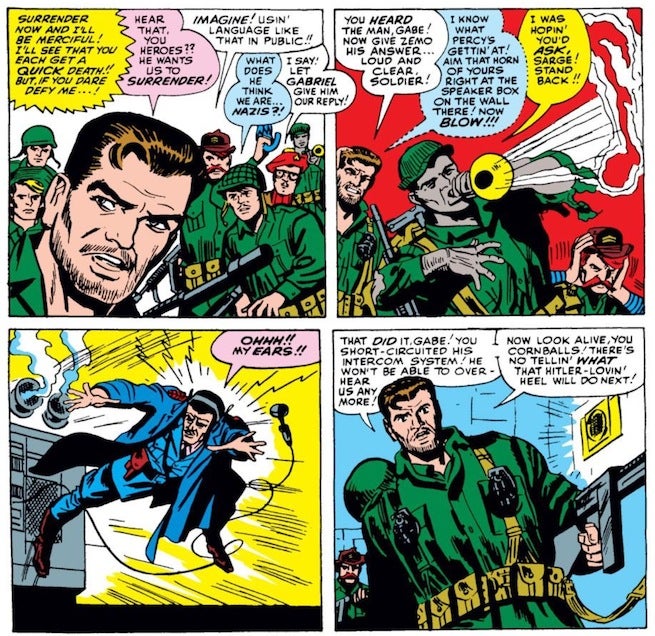 From: Sgt. Fury and His Howling Commandoes #8

In this issue, which retroactively marks the first appearance of famed Captain America adversary Baron Zemo, one of the Howling Commandoes, Gabriel Jones, uses a unique piece of weaponry to defeat Zemo. After the commandoes storm Zemo's castle (they're only able to gain access when one of Fury's men, Percival Pinkerton, tells the lone guard standing outside that the war is over) Zemo overhears the group on his security intercom system and demands their surrender. It's important to note that in this otherwise – ahem – historically accurate look at World War II history, Zemo has somehow perfected a "death ray" to destroy the Allied Powers. One has to wonder if maybe Stan Lee inserted the death ray line because he lost track of whether or not he was scripting Fantastic Four or his World War II book.

Anyway, when Zemo speaks over the intercom, Gabe magicallly produces his bugle horn (to be fair, Gabe is holding the bugle on the front cover … foreshadowing!). Gabe is then able to locate the closest microphone in the room, so he blows his horn into it and short circuits Zemo's security system. Problem solved. 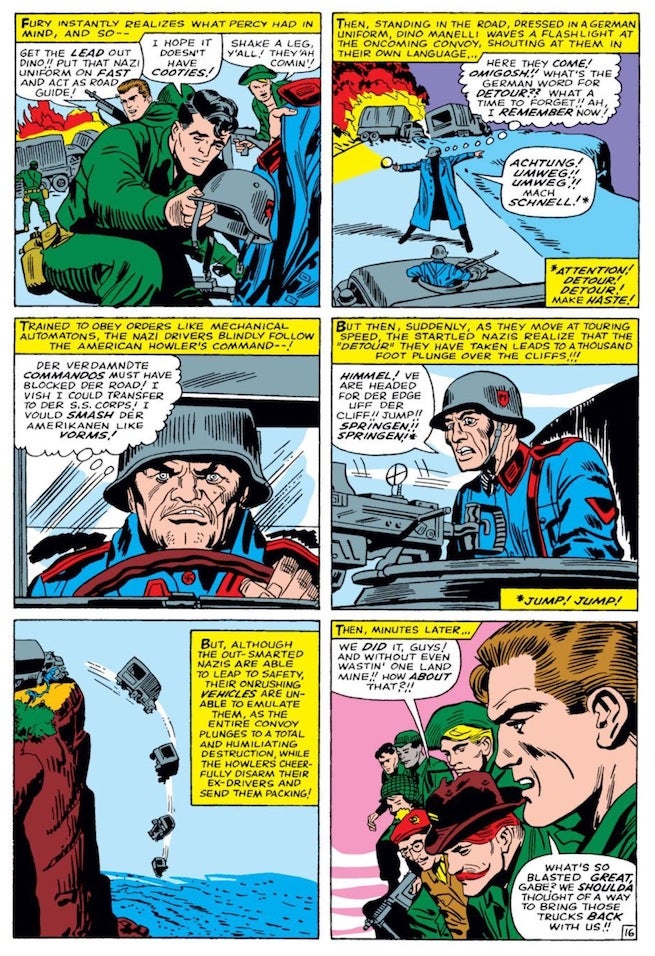 The cartoon world is filled with one-sided rivlaries. Tom and Jerry. Bugs Bunny and Elmer Fudd. Wily E. Coyote and the Roadrunner. And apparently the Howling Commandoes and the Nazis. Obviously, as the adage goes, history is written by the victors, and when it comes to World War II, you're not going to find many Americans who will go to any great lengths to portray the German army in a favorable/competent light. But the actual German buffoonery that Lee/Kirby/Ayers depict in Sgt. Fury goes well beyond the point of absurdity and is instead akin to some of the aforementioned slapstick cartoons.

In Sgt Fury #11, instead of Bugs and Daffy arguing over duck season/rabbit season, we have one of the Howling Commandoes, Dino Manelli (who has experience as an actor), slipping on a German outfit and directing an entire Nazi convoy over a cliff – where one has to assume they will then fall hilariously to their death and land with a pronounced splat (actually, the soldiers do jump out before they go over the cliff, but the fall is no less comical).

And just in case there was any confusion about the Nazis being stupid bad guys, the convoy falling scene is preceded by a German soldier muttering to himself how he was going to "smash der Amerikans like vorms!" All that's missing is a moustache to twirl. 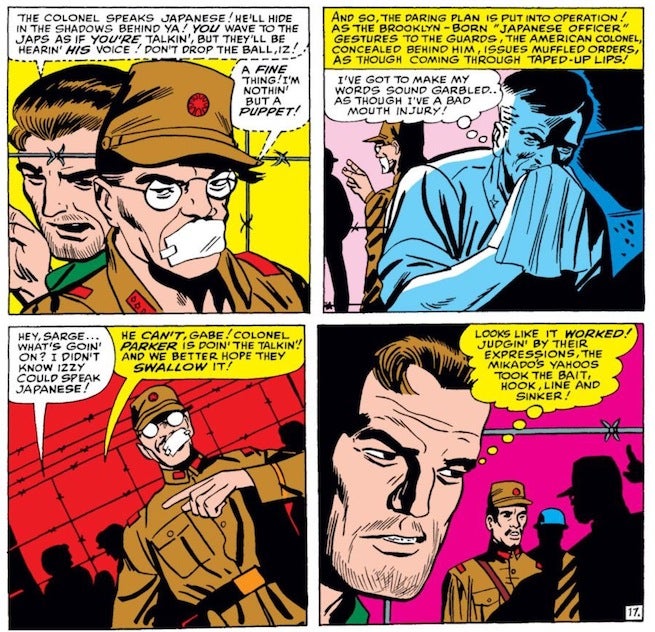 At least Sgt. Fury was an equal opportunity offender when it came to making a mockery of World War II's Axis Powers. In Sgt. Fury #10, the Howling Commandoes take a brief break from tormenting the Nazis and instead change things up by hitching a ride to Okinawa, Japan. There, Fury and his squad need to rescue a spy who was scouting Okinawa for a potential Allied invasion. Once the commadoes arrive, they instantly get into a bunch of fights with the Japanese, but it takes some chicanery to ultimate succeed and rescue the hostage.

This time around, the Howling Commandoes employed the old "put a bandage over the mouth of a guy and pretend he speaks Japanese" trick. If you're unfamliiar with such a game, it starts with taking the least Japanese sounding guy on your team – in this case, Izzy Cohen – and dressing him up in Japanese garb and putting a bandage over his mouth to essentially muffle his speech. Then, a soldier that actually can speak Japanese, pretends that he is Izzy giving orders to the Japanese soldiers. It's as brilliant as it sounds. Fortunately, it worked anyway. Next up is a performance of Cyrano de Bergerac, or the 1987 romcom Roxanne, depending on what kind of mood Stan Lee is in at the time. 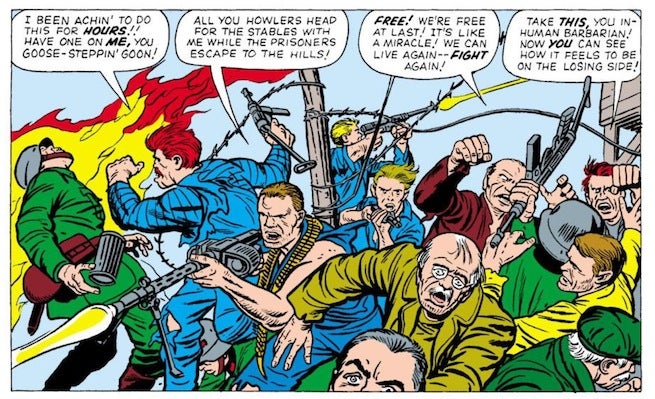 As we've already witnessed, Sgt. Fury will never be accused of being an understated series. And it's not like anybody out there really expected a comic about World War II written 20 years after the war ended by the master of melodrama himself, Stan Lee, to be an accurate representation of the war. But that doesn't mean there aren't moments in this series where, upon reading them for the first time, you kinda want to pump the brakes for a minute because you can't believe that Stan thought he could seriously get away with something like that.

Like the time when Fury and his six (!!!) commandoes went undercover at the fictional Heinemund Concentration Camp, and then proceeded to kick some Nazi butt all over the place, liberating those all of the captives. For a point of reference, World War II concentration camps would often hold tens of thousands of prisoners at one time, with a weaponized Nazi security force to match. The idea that seven soldiers – even those as well-trained and militarily proficient as the Howling Commandoes – could lead a resistance from within the camp and liberate it is absolutely preposterous. Keep in mind that the Howling Commandoes were not superheroes. These were just regular guys. Yes, comic books are a thing of fantasy, but the fact that the Howling Commandoes were liberating concentration camps two issues into the run of their series, set the bar so incredibly high for this series? What's next? Them single-handedly ending the Nazi's atomic program?

Wait, what? You got to be kidding me …

1. The Howling Commandos MAYBE Were Responsible for Ending the Nazi Atomic Program

Jonathan Hickman, author of the Image series, The Manhattan Projects, can certainly attest to being able to create an alternative history about the nuclear arms race between the United States and Germany during World War II. But there's an obvious difference between the far out fantasy that Hickman is creating in The Manhattan Projects and the winkwink/nudgenudge qualities of what Lee and Kirby put forward in the final pages of Sgt. Fury #2.

After liberating an entire concentration camp by themselves, the Howling Commandoes top that act by decimating the Nazi's Weapons Development Center – causing the facility to explode, leaving behind an ominous mushroom cloud. In the final narrative box of the issue, Lee writes that it was a known fact that towards the end of the war, Hitler ceased all atomic experiments. The narration then goes on to speculate that maybe it was the Howling Commandoes' heroics at the weapons center that caused Hitler to backtrack on his atomic aspirations.

Sure, liberating a fictional concentration camp takes some suspension of disbelief, but once you start citing legitimate world history with your story, you're really straining credulity.