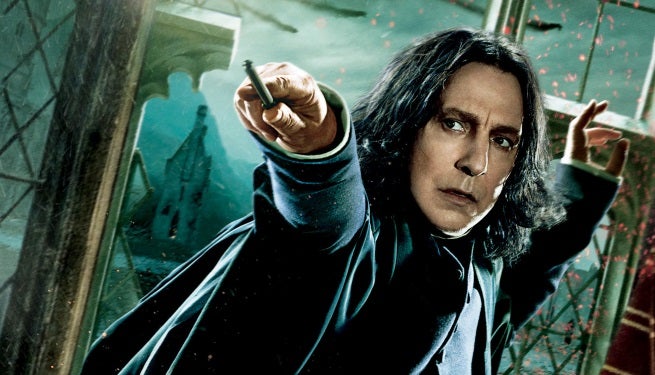 The first of 12 new Harry Potter short stories, written by creator J.K. Rowling for Pottermore, has been released online (via EW).

The new short story must first be unlocked by answering a riddle, which goes like this:

“In a house on Spinner’s End, a meeting takes place, a mother begs help for her son, tears on her face. Agreeing to help, though he doesn’t know how. Which potions master performs an unbreakable vow?”

The answer is Severus Snape, the conflicted potions master who teaches at Hogwarts when Harry Potter arrives. During the events of Harry Potter and the Deathly Hallows, Harry comes to learn that Snape was actually a childhood friend of his mother, Lily Potter, and always harbored romantic feelings for her.

The short story released today reveals new details about Snape’s childhood, growing up with Lily and her sister, Petunia Dursley, in the town of Cokeworth. Cokeworth is also revealed to be the site of the opening scene of Harry Potter and the Deathly Hallows, where Bellatrix Lestrange and Narcissa Malfoy approach Snape about making an unbreakable vow.

Remember, there are 11 more short stories being released daily on Pottermore in the days before Christmas, so keep an eye out for another one tomorrow.