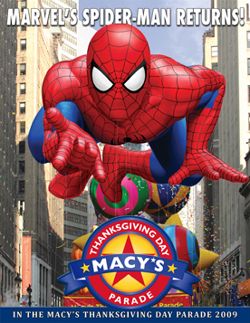 The big Spider-Man balloon has been missing from the Macy's Thanksgiving Day Parade for a decade, but according to Marvel Comics, the web-slinger is swinging back into the event. More than 3.5 millions spectators and over 50 million viewers nationwide watch the Macy's Parade every Thanksgiving. The Spider-Man balloon will be part of the 83rd Annual Macy's Thanksgiving Day on Thursday, November 26, 2009. Spider-Man originally made his Macy's Parade debut in 1987. Spider-Man was flown in the annual event for twelve years, before his balloon was retired following the 1998 procession. According to Marvel, the new Spider-Man balloon debuting in the 2009 Macy's Parade will combines the classic pose of the previous balloon (his arms outstretched in front of him and his legs bent behind in full crawling mode) coupled with a more modern look. The new Spider-Man balloon is scheduled to be a part of the Macy's Parade through 2011. "Spider-Man's return to the Macy's Balloon line-up this year is an event of seismic magnitude," says Robin Hall, who is executive producer of Macy's Thanksgiving Day Parade. "Marvel's iconic character, which flew for over a decade in the '80s and '90s was one of the most memorable balloons in Macy's long Parade history." Hall added, "When is Spider-man coming back? is a question that has been shouted from the sidelines each and every year we inflate our helium giants on Thanksgiving eve. This new, updated balloon, featuring a modern, more defined Spider-Man, will fill a huge void for Parade devotees and will undoubtedly seize the imaginations of a whole new generation of fans." "We couldn't be more excited to bring Spider-Man back to the Macy's Thanksgiving Day Parade, a landmark event that millions anticipate each year. The enduring popularity of New York's own friendly neighborhood Super Hero has only grown since the last time he appeared in the Parade and we are certain the new Spider-Man balloon will delight both long-time fans and new audiences alike," said Simon Philips, who is President of Worldwide Consumer Products for Marvel Entertainment. "With anticipation for the upcoming release of Spider-Man 4 reaching a fever pitch, the timing couldn't be better to bring back the Spider-Man balloon in this year's Macy's Parade," said Juli Boylan for Spider-Man Merchandising, L.P – the limited partnership comprised of Marvel Entertainment, Inc. and Sony Pictures Consumer Products Inc. The 83rd annual Macy's Thanksgiving Day Parade kicks off on Thursday, November 26, 2009 and is broadcast nationally on NBC-TV, from 9 AM to 12 PM, in all time zones.