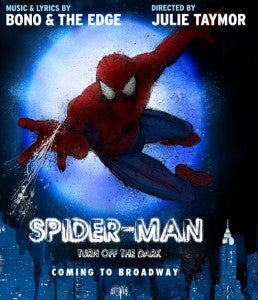 Perhaps there are some challenges that are just too big for Peter Parker's super alter ego. Reports are saying that the production, jointly steered by Bono and The Edge of U2 in writing and Julie Taymor in directing duties, has run aground due to staggering financial problems. According to The New York Post, the Hilton Theater, site of the musical, had operations ceased last week in the preparation for the musical, which was set to begin preview performances on February 25, 2010. An extremely expensive musical to produce, coming in at $45 million dollars, the show was facing almost impossible odds in becoming a viable, and profitable, musical. Another key sign that this is the end, the starring actors, notable Alan Cumming as the Green Goblin and Evan Rachel Wood as Mary Jane Watson, have been released from their contracts with no financial incentives to come back if the production picks up again. The Post also had some astounding number projections, stating that the show would have had to sell out every night for five years, just to come close to breaking even, an unheard of feat for a Broadway musical. This could be one of the biggest setbacks with one of Marvel's flagship characters. What, if anything, will happen to the concept of the project remains to be seen.