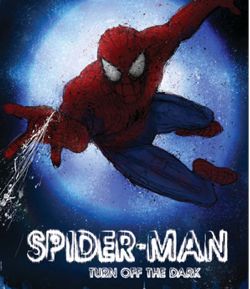 The New York Post is reporting that the upcoming musical, Spider-man: Turn Off The Dark, will be set to a "circus rock-n-roll drama." The announcement came on Friday from show director, Julie Taymor, during a presentation with ticket brokers. Also in attendance for the meeting were U2's Bono and The Edge, who offered samples of several of the musical's songs they had written thus far. During the meeting, a video presentation showed many of the show's set designs and villains who are to appear in the Spider-Man Broadway show. Among the list of villains are Kraven the Hunter, The Lizard, and an entirely new villain created just for the musical, named Swiss Miss. This female villain is a dominatrix with an affinity for extremely sharp knives. Taymor also hinted at a special guest villain to appear in the musical. Possibly the most startling news during the presentation was the revelation that Turn Off The Dark was going to be set as a rock n' roll circus, and not as a traditional Broadway musical. CBR's JK Parkin likens the theme of the musical to that of Cirque du Soleil, with set designers using "webslinger technology" to help Spider-Man swing out over the audience. Thanks to Parkin's description, my bet for the mystery villain would be The Ringmaster, a felonious circus owner who uses a hypnotic device on his hat to put his customers in a trance while his employees rob them. If Taymor's planning on going the Cirque du Soleil route, Ringmaster would be the perfect fit to bring all of Spider-Man's villains under the big top.