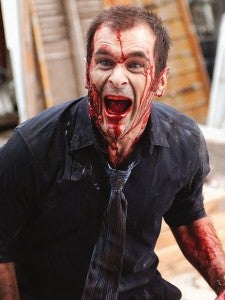 On the off chance anybody thought Ty Burrell, most notably of Modern Family fame, took the gig on Zack Snyder's Dawn of the Dead remake just for the paycheck, he certainly went a long way towards showing fans he was one of them last night, when he not only talked at some length about his role on Dawn of the Dead but also brought a piece of custom-edited footage that depicted Conan O'Brien as Star Trek: The Next Generation's Admiral Jameson. Burrell appeared on O'Brien's late night comedy show Conan on TBS last night, and brought the geek culture references with him in a big way. "I'm really excited to be back, primarily because I wanted to ask you a question, which is: why are you so ashamed of having been on Star Trek?" Burrell asked a confused O'Brien. "You went to great lengths to cover up your identity--you can't find it on IMDb or Wikipedia. It was actually a very popular show, I don't know if you know that!" After a bit of banter back and forth, Burrell screened some doctored footage from Star Trek: The Next Generation, with O'Brien apparently having sat in for Admiral Jameson, originally portrayed by Clayton Rohner in the episode "Too Short a Season." Regarding his role in the Dawn of the Dead remake directed by Man of Steel's Snyder and written by Guardians of the Galaxy's James Gunn, Burrell noted that it was the culmination of a career which, up to that point, had seen him play mostly jerks, whom the audience wouldn't wait to see something terrible happen to. Shown a photo of himself as a zombie, the actor joked, "That's how I looked through the whole movie; I was just delivering regular dialog." The Burrell appearance, of course, plays to some of Conan's recent strengths; some of his most popular sketches in recent memory have revolved around poking fun at The Walking Dead or having first a real (but comically short) and then a fake "exclusive clip from Star Trek Into Darkness."