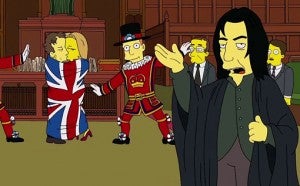 star Benedict Cumberbatch, who plays John Harrison in J.J. Abrams's upcoming sequel Star Trek Into Darkness, will appear in a pair of roles on Fox's animated staple The Simpsons tonight. In the episode, titled "Love is a Many Splintered Thing," Bart's heart strings are pulled once again when Mary Spuckler returns to Springfield. But his failure to pay her enough attention strains their relationship. Marge, too, puts Homer in the dog house. Cumberbatch will play two roles in the show, Cumberbatch plays two roles in a movie within the show. From StarTrek.com:

"In Love, Indubitably (a wink at Love Actually, yes, and also, we hope, to Maeby's movie on Arrested Development), Benedict Cumberbatch — that coldly dashing Sherlock star who is playing the villain in Star Trek Into Darkness — pulls brilliant double duty by voicing both a Grant-like British Prime Minister and Severus Snape from Harry Potter."

Star Trek Into Darkness Villain Cumberbatch on The Simpsons Tonight