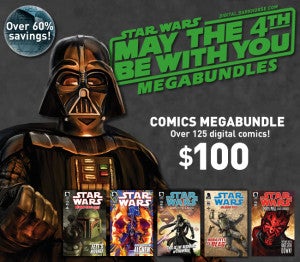 Just in case Free Comic Book Day wasn't enough excitement for our readers tomorrow, there's a barrage of Star Wars-themed goodness coming your way in celebration of the "May the Fourth Be With You"-themed Star Wars Day events. Dark Horse Comics are presenting a pair of digital "MegaBundles," including a $100 Star Wars comics bundle that's about 60% off the retail price of the books included. There's another bundle, too, aimed at all-ages material that will run you $30. Each one comes with an exclusive two-page digital preview of the highly anticipated comics adaptation of The Star Wars, George Lucas's original-draft screenplay. Written three years before the 1977 film, this first vision of the galaxy far, far away introduces us to Jedi Annakin Starkiller and General Luke Skywalker, as well as a six-foot alien named Han Solo. It's a tale of fantastic adventures, daring escapes, "laser swords," and monsters, and is sure to read like no Star Wars you've known before! For those of you who don't do digital comics, though, there's a Free Comic Book Day issue featuring Darth Vader and Boba Fett. ThinkGeek, meanwhile, is running a sale that gets you $20 off any Star Wars purchase of $100 or more. Sadly, they aren't selling the Dark Horse megabundle, or that'd work out really nicely...but they've got quite a bit of stuff at that link above. Fans on the West Coast can join up with Gentle Giant Ltd., who are appearing to sell Star Wars merch at the Egyptian Theater in Hollywood, where there will be screenings at 2 p.m., 6 p.m. and 10 p.m. of Return of the Jedi. They'll also have a presence at Super 7's in-store celebration in San Francisco, where they'll bring Steve Sansweet for a signing of his new comprehensive guide to Star Wars action figures and the Rebel Scum message board community are holding a meetup. Lastly, they're holding a promotion on their site where anyone who buys Star Wars-themed merchandise on the fourth will get 400 rewards points (equivalent to $20 in credit). On May 4th, the popular Star Wars By Her Universe line will debut six new fashion pieces exclusively on Hottopic.com. The first 500 customers who purchase a Star Wars by Her Universe item online at Hottopic.com beginning at 1am PST on May 4th will receive a FREE Star Wars by Her Universe cinch sack. In addition, all day on May 4th Hottopic.com and Starwars.com (the official Star Wars website), and their social media sites, will celebrate this special fan holiday with fan-themed content and giveaways. "I am thrilled to be working with Hot Topic again to celebrate May the 4th Be With You," said Ashley Eckstein. "I am also excited to debut a new design with one of our favorite guest designers, Denise Vasquez. Denise brought her unique Day of the Dead inspired style to a new design featuring Boba Fett." In celebration of "May the 4th Be with You," Her Universe will also be offering 20% off of all current Star Wars apparel onwww.HerUniverse.com on May 4th (Hot Topic product only available on Hottopic.com). In addition, while visiting the Her Universe website, fans can also view the past and present honoree's for "fangirl of the day" - part of a very special year-long campaign, the "Year of the Fangirl," which spotlights and recognizes fangirls of all ages showing their diversity, dreams and interests. Anyone can nominate a fangirl to be highlighted on the site. Go to www.HerUniverse.com for more information.