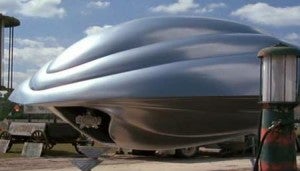 Colin Trevorrow, who was until last week the frontrunner to direct Star Wars Episode VII in the minds of many fans and entertainment journalists, will instead co-write and probably direct Flight of the Navigator, a remake of the 1980s Walt Disney film featuring a young man who is abducted by aliens and returns soon after to find his friends and family have aged a decade in his absence.

"Flight of the Navigator wasn’t a seminal movie of my childhood but I remember liking it and the original meant a lot to Colin as a kid, so it’s really his baby," Trevorrow's co-writer Derek Connolly told Variety. "It’ll be good to have some balance so it’s not two fanboys writing the movie."

Trevorrow and Connolly also wrote the film Safety Not Guaranteed together.

Trevorrow is one of the only filmmakers to have acknowledged meeting with George Lucas regarding the Star Wars sequels, although when comments he made about Flight of the Navigator appeared to have been about Star Wars, he clarified that he is categorically not directing Episode VII.

“I can’t speak with any specificity as to what the next thing will be. There are amazing opportunities that have arisen as a result of this,” Trevorrow said in the interview, which is embedded below. “One of them, I will say, will probably create a good deal of ire against me on the Internet when people find out what it is. So, I just want to say in advance that I promise you, for all those who love the mythology that I will be tackling, trust that I love it as much as you do. And I will respect it, and hopefully make it not suck.”