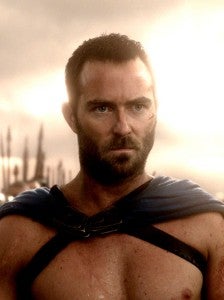 According to the popular news-and-rumor site Latino Review, 300: Rise of an Empire star Sullivan Stapleton may be adding a different Empire to his resume, as he's auditioning for Star Wars Episode VII.

They don't know who he auditioned for--largely because, as one would expect from both Lucasfilm and director J.J. Abrams, not much information is official yet and even the stuff that has leaked out hasn't been confirmed. Meanwhile, anything that isn't already in the water has been locked down with an eye toward keeping production as secretive as possible.

Don't expect to hear much more about it, though, because according to Latino Review, there may be official denials to obscure the fact that Stapleton has already talked about his audition and that Lucasfilm are not happy about his having done so (wonder how they'll react to Soarise Ronan, then?). Between the fact that it's just an audition (so he might not get the gig) and the fact that it has now leaked out via Latino Review, expect anything close to official talk of Stapleton's involvement to more or less grind to a halt until and unless he's officially cast.

In addition to saying that Stapleton is up for a role, the site also reports that their sources tell them "Don’t believe reports that they’re not filming in New Mexico, and this IMAX thing is out of context."

That "IMAX thing" is the fact that IMAX CEO Richard Gelfond recently claimed he was in talks with Abrams to work on the Star Wars films.