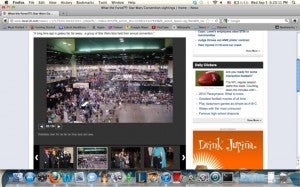 WPLG Local 10 News in Miami has drawn the ire of the Internet by posting a slideshow of images from a recent Star Wars convention with a variety of mean-spirited captions directed at fans and cosplayers, identifying the attendees as "dateless men as far as the eye can see."

Some of the other captions, no longer available on their website, included:

"These were a group of guys that spent the entire weekend jumping in to other people's pictures. It was MUCH lamer than it sounds."

"Poor kids... they were never given a chance. Geekdom is in their genes."

"Here's a shocker... it's dudes taking pics of the fake Princess Leias. Like they've never seen a woman before. Well, hmmm..." "A reproduction of their prom picture... no girls."

The resultant protest from the Internet revealed a news organization unprepared for the accusations of cyber-bullying that such coverage would generate, with employees running their social media pages who clearly had no patience for the discontent. Besides banning and blocking users who commented on the story, the moderators of the station's Facebook page, when forced to take the story down, issued an apology so hollow that it only served to keep the complaints going, leading to a Facebook group and Change.org petition demanding a formal apology to Star Wars fans for the slight and a charitable donation to one of the organizations that the 501st Legion, a local Star Wars fan group, works with. 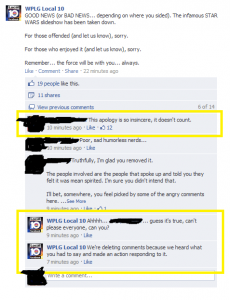 The previous apology, issued on the Facebook page, was deleted by WPGL shortly after they posted it. It read,

Both before and after the apology was removed, the station had been deleting comments from Star Wars fans regarding the controversy, whether or not they maintained a civil tone (which, as ever with the Internet, is more or less always a crapshoot). As seen in this screen capture taken by the Miami New Times before WPGL removed the thread, the station explained itself by saying "We're deleting comments because we heard what you had to say and made an action responding to it."

Later comments have apparently contradicted that, with a representative for the protesters' Facebook page saying, "They have been on auto-feed all along. they go to the regular page, then they are funneled into the box on the left through a program available to folks who have pages set up as interest pages. They might have engaged in some deletion, but I wasn't seeing a lot get deleted."

Calls to the station were met with no-comment responses, and ComicBook.com was told to e-mail the news desk. Those e-mails have so far gone unreturned.

One of the people in charge of the Facebook group dedicated to demanding an official apology reportedly met with WPLG earlier this afternoon and requested that his supporters engage in a "ceasefire" until he returned with a report from that meeting. That meeting is apparently still not concluded after about two hours, but an update has been posted to the Facebook page:

fans in general appear to be less prone to giving WPLG the benefit of the doubt, with fans speculating that the station is merely using the "ceasefire" to clean up their website and social media sites by further deleting comments and banning users.

Things like this don't happen in a vacuum, of course; Jordan Burchette of Men's Health was similarly cruel to New York Comic Con attendees in a story that generated a huge backlash, was briefly removed from the site, but then run again later once the pressure was off. Burchette reveled in the attention on his personal blog, reposting a bunch of the hate mail and calling his critics "sanctimonious a--holes," on the off chance anybody thought he may have been chastened or learned something from the experience. Even Comic Book Resources's Jonah Weiland has occasionally taken heat in the comments threads for getting a little too cavalier with his humor on their cosplay stories.