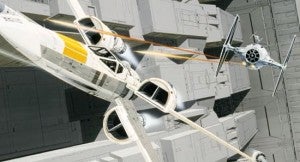 , the new animated series coming to Disney XD that will reportedly bridge the gap between Revenge of the Sith and A New Hope, is beginning to find its cast, according to The Hollywood Reporter.

The magazine's Heat Vision blog reports that David Oyelowo, Freddie Prinze Jr., Vanessa Marshall, Taylor Gray and Steven Jay Blum are in the process of being cast as the voice leads for the series, which will make its debut in fall 2014.

Oyelowo is currently starring in The Butler and is shooting Interstellar for The Dark Knight director Christopher Nolan. Freddie Prinze, Jr. has starred in the Scooby-Doo movies and appeared on Psych, and is married to geek goddess Sarah Michelle Gellar of Buffy the Vampire Slayer fame.

Marshall, Gray and Blum are notable voice actors, with Marshall and Blum most recently having starred in Justice League: The Flashpoint Paradox as Wonder Woman and Lex Luthor.