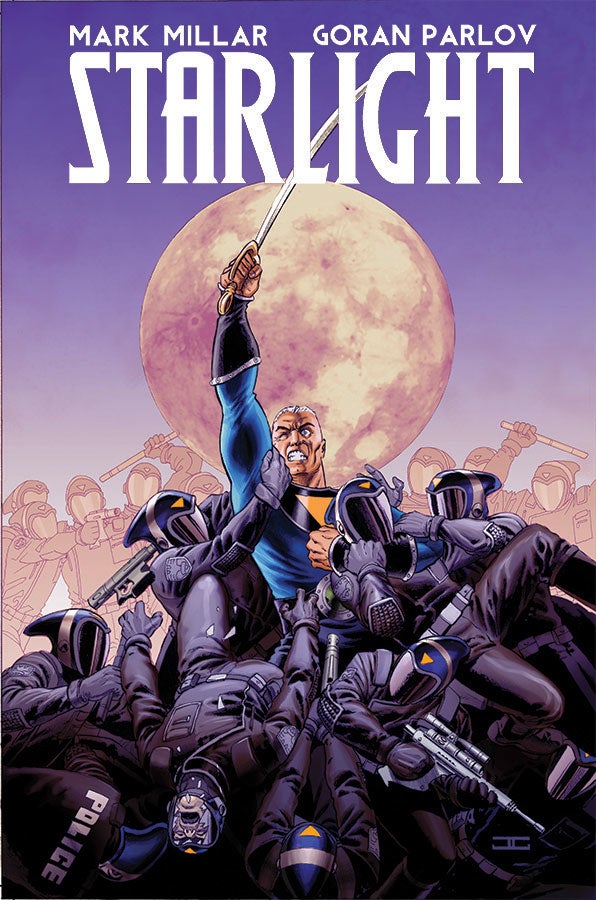 Going into Starlight #6, you should know exactly what to expect. The series has made no effort to disguise what it is. Its tone, plot, and characters have all captured the essence of a pulp adventure. Duke McQueen’s adventure on Tantalus ends exactly how you would expect. Yet with its resolution, the story manages to evolve beyond being just an exciting homage to a classic genre.  It becomes something even more thrilling.

The conclusion of Duke’s adventure on Tantalus alone would be enough to make this issue a top pick of the week though. Mark Millar and Goran Parlov do everything they can to make the big finale gripping. They include massive set pieces, clever reversals, and loads of action. It is everything you could imagine wanting from the conclusion of a blockbuster movie.  The explosions, one liners, and punches are all presented with precision and allowed to settle with readers.

The emotional conclusions achieved in the final battle are just as satisfying. The conflicts that play out in this final battle have all been set up since the first pair of issues. Every protagonist is seeking a specific resolution. The reason that these resolutions are gratifying isn’t just that they are the ones desired by protagonists and readers, but that they are presented with style and panache. Dialogue and action beats in these conflicts hit with the skill of an expert boxer delivering a one-two punch. They land just where and how they should with explosive impacts. The big moments are absolutely obvious, but they don’t seek to be anything else. They work because they provide the desired ending in the most satisfying fashion possible.

It’s for that reason the first half of this comic works so well. It’s good at being what is and knowing what it isn’t. Millar and Parlov have succeeded in telling this adventure story by understanding the genre and what makes it work, not by attempting to reinvent or subvert it. The heroes are heroic and the villains are villainous. The action is exciting and the emotions are sentimental. The first section of Starlight #6 doesn’t work to be something it is not; it only aspires to be the best of what it is. Rather than pointing out the farcical nature of science fiction pulps, Millar and Parlov embrace what is great about Starlight’s influences.

Parlov is the real hero of this section. He has brought the world of Starlight to life, bringing an aesthetic that is perfect for this world. Starlight has combined two distinct settings into a single story. There is the aged vision of Duke and the ugliness of Lord Kingfisher’s despotism set side-by-side with the wonder and beauty of Tantalus’ palaces and terrain. Parlov has blended these two concepts seamlessly into a single story. The vicious moments such as executions and slaughter retain a hard edge. Duke too feels hardened.  It’s easy to see the age in Duke’s face, his stubble and hair give him a haggard appearance. He’s not a classic beauty (although he might once have been). Parlov doesn’t revel in the ugliness though, but brings it into existence alongside the transcendent spectacle of an alien world. His smooth linework and geometric designs bring forth wonders. Forests and palaces alike are made to be marvels.

Parlov’s sense of storytelling is just as worthy of praise as is his style. All of the drama and action in Starlight #6 don’t function simply because they are part of a story well crafted in the tradition of pulp adventures; they function because they are perfectly told.

The pacing is spot on. There is a lot that occurs throughout the climax of the story, but it never feels rushed or slowed. It is the baby bear of comics action: just right. The key to this is that Parlov always provides just enough information to communicate changes in action and momentum. He never wastes a panel on an unnecessary action, nor does he ever provide too little information. The connections between each panel in Starlight are chosen with purpose and presented effectively. It is possible to study each transition and note how it informs the reader and why it is important.

Parlov makes use of single page spreads sparingly, but uses them to maximum effect. There is only one in the climactic battle sequence. Unlike many comics artists, he doesn’t use the page in the manner of a poster focusing on a single impactful pose that adds little to the story. Instead, he opts to make the scope of the story as wide as the panel. This page provides a lot of information. It details the state of the battle and the positions of the major characters. It is composed so that readers will naturally move from top to bottom and pick up on all of the necessary details as they do so. Every page of Starlight #6 reveals Parlov’s incredible instincts for visual storytelling.

The first half of Starlight #6 is a beautiful example of effective comics storytelling, but the second half is even better. Duke makes a decision and that choice transforms Starlight from a simple adventure homage into a commentary on the nature of heroism and the fictional heroes celebrated by society. It adds depth and meaning that is entirely unexpected based on previous Millarworld comics.

Parlov executes the transition from big action to a series of much softer, quieter moments. The big, obvious story beats that fill the comic’s front half are subverted with a series of much more genuine, human scenes in its end. The final two pages are some of the most striking and tear-inducing that have been published this year. It is a surprise to say the least. Parlov takes what could have been a jarring tonal shift and seamlessly connects the two narratives. Starlight #6 is telling two very different narratives, but they are part of a greater whole.

Starlight #6 is a beautiful story, wonderfully told and expertly crafted. It’s impossible to discuss the conclusion of Starlight #6 without removing some of its impact. As a final issue, it is honest and human in a way that very few genre comics are. It is a conclusion that not only manages to complete a story in a gratifying and deserved manner, but also transcends itself to become something very special.

Check out “Starlight: Resilience, Hope, and Optimism” a deeper look at Starlight and its place in the Millarworld line of comics.

Starlight #6 Achieves Its Goals, Then Transcends Them (Advance Review)