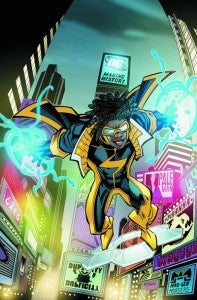 Static Shock has always been one of those characters that I've known about since his inception, but admittedly I never paid much attention to him. I knew he had an animated series for a time, had his own host of fellow heroes and villains even made appearances alongside other DC heavyweights a couple of times. I was aware of his powers, the fact that he was a teenager and that he used some pretty neat tech as well. And that was about it. Well, it looks like it's time for me to get acquainted with the electrically-powered teenager, as Static Shock #1 rolled out this week as another installment in the DC relaunch. Having no real dislike or enthusiasm for the character was quite refreshing as I tackled this inaugural issue, and I have to say that as a whole I was entertained and curious about what the future might hold for this newest hero to fly above the skies, defending New York City from villains and all manner of terrible threats. Scott McDaniel and John Rozum have a pretty tough task as the writers of this series, considering the fact that they have to please and satisfy long-time fans of the character who are excited that he is part of this major event along with the fact that they have to introduce this character and make him exciting and interesting to readers who might feel like checking out a new series since, after all, it IS the beginning. On the whole, it succeeds. Static's dialogue, in his role as the hero and his secret identity of high school student Virgil Hawkins, is believable and quick. It doesn't come across at all as if the writers are trying too hard to make Static young and, god forbid, "hip", with it being completely telegraphed in the process. It's believable, relatable and smooth. You definitely get bang for your buck in the dialogue part, both internal and between characters, as Static likes to talk. A lot. It hearkens back to an earlier era in comics where the young hero chatted and quipped it up with the villains he was chasing, all the while letting the reader know, through copious thought bubbles, what his plan to stop the bad guy was. It's actually a nice thing here, and I can see this book appealing to younger readers, even though it has a T rating. There's lots of focus on Static and his powers in this first issue, and certainly there's no shortage of action as he chases a runaway thief with a souped-up suit across the city. There's enough going on here to give new readers a sense of just what Static's powers are and how he can use his brain to his advantage in battle. Smart heroics are often effective heroics, and Static shows that effectively. His actions attract the attention of some very dangerous people, and it appears that those on the side of the law might be involved with this shady group as well. The only weak scene in the story is the scene where the villains strategize how to handle this new transplant into their city. The characters in this scene feel a little exaggerated and stereotypical as far as bad guys go. It's an odd pairing considering how realistically Static was handled, even during the brief scene between he and his family. Accompanying these pieces of snappy narrative are some quality pencils from Jonathan Glapion and Le Beau Underwood. They capture the youthful feel of the comic in a way that makes it relatable to the story and the reader. Static frequently has a smile on his face, a rare sight in heroes these days! Overall the issue works and presents a refreshingly optimistic hero, which makes the contrast with the villains, in a perfunctory appearance, all the more glaring. Perhaps they will jar him back into reality, but who knows. A final splash page as the issue closes promises that Static might be brought down to earth sooner than he thinks. Static Shock #1 does a lot well, and definitely is "second issue worthy" on the whole. Grade: B +/ A -

Static Shock #1 Review: A Decent Jolt for a First Issue!