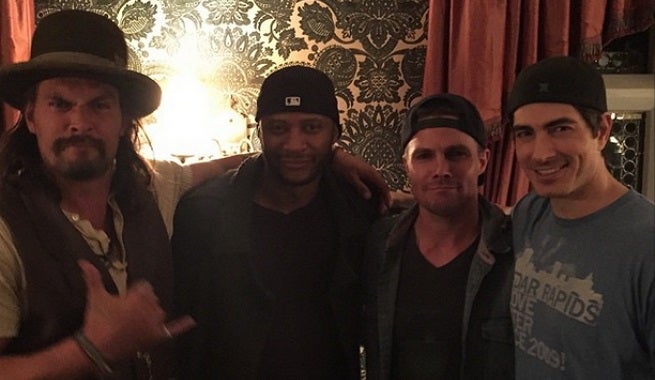 While the exact nature of coexistence between Warner Bros. DC Comics film and television universes is nebulously defined at best, Jason Momoa and Stephen Amell decided to throw all that to the wind and host their own crossover of sorts.

As seen in photos on Instagram, Momoa (Aquaman of the film universe) and Amell (Arrow of the TV universe) shared some time and drinks together, along with David Ramsay (Diggle) and Brandon Routh (The Atom).

You can check out more photos at Momoa's Instagram feed, including shots with Jesse L. Martin (Joe West).

Mmmmmm the cock inn. Delicious Mahalo to the nocking point

Behind the bar at the cock Trouble

Arrow concluded its latest season last week, and The Flash is set for its big season finale Tuesday at 8 p.m. on The CW. Both shows will return this fall, with Legends of Tomorrow, the new spinoff show, debuting as well.