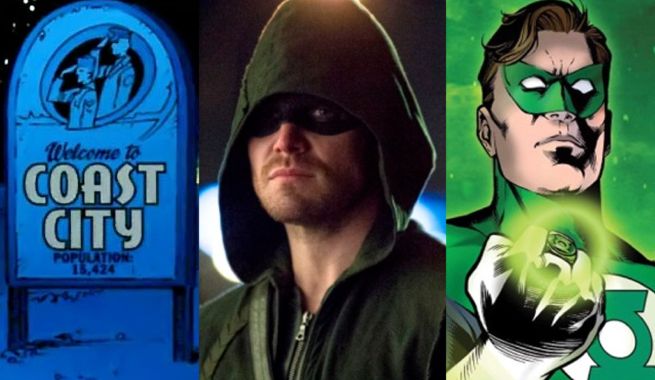 When we were rounding up the big takeaways from the Season Three finale of Arrow, one thing that stuck out to us was that Oliver Queen appeared to be heading to Coast City in the final scene of the flashback sequence.

That city, famously home to Green Lantern Hal Jordan in the comic books, has been name-dropped a number of times on both Arrow and The Flash, but it seemed different this time: not only is Oliver going to actually, physically be there, but the day before Arrow's finale, an episode of The Flash made reference to the disappearance of a Ferris Air test pilot.

That, of course, would be Hal Jordan, and it seems likely his disappearance is connected to his introduction to the Green Lantern Corps, a spacefaring group of law enforcers who recruited Hal by grabbing him while he was working on a stationary flight simulation pod.

In an interview with TVLine, embedded below, Arrow star Stephen Amell shared his thoughts on the finale and, among other things, what the involvement of Coast City could mean for Arrow.

Reiterating that he knows almost nothing about the direction of the main story this year, Amell said that he knows basically the whole flashback story. Later, when asked whether Damien Darhk would appear again on the show, Amell answered in the affirmative, adding to Darhk "H.I.V.E., Coast City, all that good stuff."