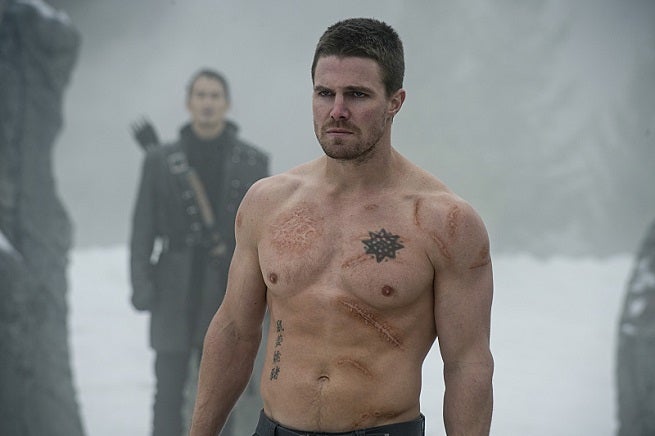 In a new interview with Collider, Arrow star Stephen Amell confirms the existence of Lazarus Pits on the show...but assures fans that's not how his character will return.

"We just saw him fall," Amell said when quizzed about how they might justify bringing his character back from the apparent dead on the show. "We've seen Oliver survive. So, [we don't know] whether he went straight off the cliff, whether something broke his fall, whether he hit the ground. We have mystical herbs on the show that have healing powers. We've seen a Lazarus Pit, although that's not something that's going to be used for Oliver. I hope he survives. I like playing him."

Lazarus Pits are a naturally-occuring phenomenon in the DC Universe; think of it as a natural spring with restorative powers...very restorative. They can help cure and heal those at death's door, or keep a healthy person young seemingly indefinitely. For centuries, the pits served the purpose of prolonging the lives of Ra's al Ghul and those closest to him. Nyssa, who appears on Arrow, has periodically used them.

A number of other characters have taken a dip in the pits to be healed, including Batman. At one point, Ra's claimed that the pits could even restore those long dead, stealing the bodies of Thomas and Martha Wayne and threatening to bring them back to life. In most cases, the Lazarus Pit has a corrosive influence on the user's mental health, particularly if used over a long period of time.

Lazarus Pits are composed of a unique unknown chemical blend that bubbles up somewhere within the Earth's crust to the surface at key points on Earth, typically at the junction of ley lines.

In addition to the pits' regenerative uses, their power has also been used as a weapon. When Nyssa once confronted the Injustice Society, she claimed to have a staff which channeled the power of the pits and could therefore destroy both the undead Solomon Grundy and Gentleman Ghost.

Could it show up on Arrow? For a long time, fans and critics have said no. The show is too "grounded" and "realistic" for things like the Lazarus Pit. The presence of the Mirakuru soldiers made some question that notion, though, and this year's crossover with The Flash shows that the series is open to the fantastic.

...Maybe they realized they couldn't raise him with the Lazarus Pit without risking the loss of all of Oliver's glorious scars?

Arrow is back Wednesday night.

Wu-Tang Clan RPG Reportedly in the Works With Xbox