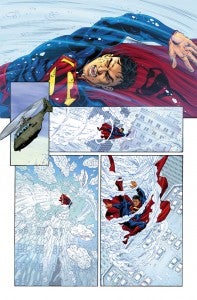 Fan-favorite artist Nicola Scott, recently of Birds of Prey fame, will draw draw Superman #3 later this month, as well as the fifth and sixth issues of George Pérez's recently-relaunched series, according to DC's blog, The Source. While Scott's absence from the creative lineup of the New 52 relaunch was one of the factors that has led to some backlash and controversy surrounding the roles of women both on the printed page and behind the scenes at Marvel and DC, she was shortly thereafter announced to be drawing an upcoming Justice Society of America ongoing series with The Shade writer James Robinson. DC's blog entry referred to Jesus Merino as the series' ongoing artist, who will draw the fourth issue and then return for #7 with incoming creative team Keith Giffen and Dan Jurgens. Jurgens had previously been identified as the co-writer and artist-to-be, but the phraseology at The Source makes it likely that Jurgens will essentially take over Pérez's vacated position as writer and breakdown artist, with Merino providing finished artwork. "She's working off the same layouts I would have done for Jesus, but she's working witha  totally different art style," Pérez said of Scott's work on the third issue. "She's closer to my style, more in the classic vein. I can't wait to see Nicola's work!" That interview, along with some other comments by members of the Superman and Action Comics creative teams, appeared in the back of this week's Action Comics #3. Fans can already see some of it--not just here, but at the original story at The Source. It appears that Scott will be the first artist allowed to draw both versions of Superman--the t-shirted "people's hero" of action comics and the Kryptonian-armored present-day version currently appearing in Superman and Justice League, per the preview pages on DC's blog.