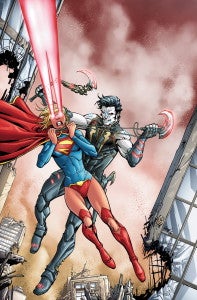 Beginning in December, writer Tony Bedard and artist Yildiray Cinar will take the reins of Supergirl, a title that's been one of the surprise critical hits of the New 52. A character who often exists in the shadow of her more famous cousin, Supergirl rarely gets treated like an A-lister in her own right--something that creators and editors have done their best to remedy since the line-wide relaunch two years ago. The result has been a compelling series that focuses on character and a version of Kara that's more compelling than anything we've seen, arguably since Peter David's Supergirl run (which starred an entirely different character). With the last remnants of the original creative team leaving the title in December, though, former R.E.B.E.L.S. and Teen Titans writer Tony Bedard is coming aboard, having had some experience writing both Supergirl...and Lobo, the newly-redesigned DC anti-hero who will appear in his first arc on the title. He hasn't had quite as much experience in the New 52, though, and hasn't written either character since the relaunch, so he talked with Newsarama yesterday about the new approach to Lobo, what he thinks of it and how it plays into what he's doing with Supergirl. 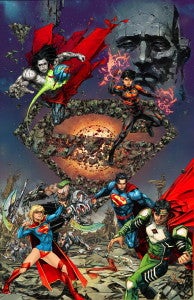 "To begin with, I'm a longtime Lobo fan," Bedard told Newsarama. "I first came to love him in Justice League International back in the '80s, then in L.E.G.I.O.N. '89. He was a fun character, but played fairly straight — scary, edgy, and unstoppable. Then the Giffen/Grant/Bisley Lobo's Back series sent him way over the top and ten years later as I was editing Alan Grant's Lobo monthly the character was played for farce. A few years ago, I even got to write the Main Man in my R.E.B.E.L.S. series that was really a L.E.G.I.O.N. revival." He added,

I say all this to underscore that I've seen Lobo's look and tone change several times over the years, and I'm almost amused by the backlash that greeted the new Lobo's announcement. Now that folks have had a chance to read Marguerite Bennet's Lobo issue, I hope they've seen the less farcical, more intense Lobo is a pretty effective character. I feel like he's dangerous again. And I know he has a cool new backstory that will play out over time. If anything, he's more like the early days of Wolverine, when part of the character's appeal was the sense of mystery. So in Supergirl, we'll tease a few new things about Lobo and see that he is super-intense, focused, cunning, and unpredictable. I still feel like I'm writing the real Lobo, I'm just not going for the cheap laughs — the crass, loutish stuff. Not that I hated that stuff, but it's okay to change. I love the campy, wink-and-a-nod Roger Moore Bond films. I also love the more serious, stripped-down Daniel Craig Bond. This Lobo is more of the Daniel Craig approach, if that makes any sense. At the end of the day, though, this is not a story about Lobo. It's Supergirl's book and it's her story. Lobo is there as a sort of dark reflection of her. They're both super-powerful loners left over from dead planets. Lobo has channeled his power and rage into becoming the most dangerous bounty-hunter/assassin in the galaxy. Supergirl's still trying to figure out what to do with her power and her lot in life. Tangling with Lobo will show her one path she might go down. It's really a cautionary tale for her, and she'll come away knowing that she could easily end up like him if she doesn't get her act together.

Bedard's Supergirl #26 will be on sale December 18.