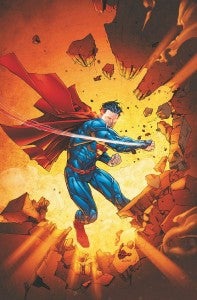 A look at the Diamond Comics Distributors retailer solicitation copy for October proved to provide comic shops with a fairly different look at some of the incoming zero issues than the previously-available solicitations made for public consumption did, according to a report by Newsarama's Michael Doran. He found a handful of changes made to solicitation copy and--while Newsarama listed them and left interpretation open to readers, a few bullet points seemed worthy of note... The Phantom Stranger #0, which previously gave only vague details as to what its interior story might be, now implies that it will feature The Spectre, and tells retailers outright, "Major players in the New 52 will be introduced in these pages." Certainly, it's no surprise that the title will tie into the Free Comic Book Day issue, in which Phantom Stranger's revised New 52 origin took place--and it shouldn't be particularly surprising that a book being written by DC Entertainment Co-Publisher Dan DiDio will have far-reaching implications, particularly as we look forward to Trinity War, which will clearly feature Phantom Stranger in a pivotal role. The fact that we'll get what appears to be our first on-panel look at the new Spectre is interesting, in that it will finally answer one of the questions that's been lingering since the New 52 was announced: Which version of the Spectre will we see? My money is on Crispus Allen, with the possibility of Jim Corrigan appearing in Earth Two, but it's entirely possible that DC editorial could decide that The Spectre is a cosmic entity for which there's no multiversal equivalent--and if there's only one Spectre, it's likely to be Corrigan. Batwoman #13 gets a similar reveal, with the issue's villain (previously hidden in the for-publication solicitation text) revealed to be Medusa. Luckily, Kate will have Wonder Woman backing her up, so that shouldn't be all that challenging. In Red Lanterns #0, the "prophecy that threatens to change everything" has been revealed as the prophecy of the Manhunters' return. That's unsurprising, too, considering that Geoff Johns is shepherding in The Third Army crossover event between all of the various Lantern books, and the title would make significantly less sense if the First Army (that being the Manhunters, with the Green Lanterns as the second) weren't there to take part in the colorful orgy of light-based violence that's sure to come. Last but surely the most relevant: Superman #13's solicitations are changed ever so slightly--but those changes reveal a death in the issue! According to Newsarama, the retailer solicitation text reads (with the creative and sales information removed):

· It's a deathrap for Superman as he matches wits with his greatest enemy for the final time as The Man of Steel loses it! · Plus: The death of...?!

Certainly the implication here is that Superman causes the death of whoever it is that dies when he "loses it." That's likely a misdirect, but the "death of..." teaser generally means it's someone who's enough a part of the series for you to feel the character's loss. Who could that be? With a new creative team taking over and apparently focusing more on the "super" side of Superman (including a Superman #0 cover that appears to feature his Kryptonian father, Jor-El), it's entirely possible that anyone in the newsroom who isn't named Perry, Jimmy or Lois is up for grabs. During the Perez and Jurgens runs, it's been clear that the writers wanted to do something interesting and different with the Daily Planet, to mixed results, and Lobdell may just charge in looking for a big, meaningful story beat and decide that a death in the newfound Planet family is a good way to do it. Don't be surprised if it's Perez's thinly-veiled Bill O'Reilly stand-in who takes one for the team. The other side of that, of course, is that the way the solicitation text is written (Superman's final showdown with his greatest enemy, followed by the death teaser) suggests that it may be the villain who bites the dust in this issue. Of course, his "greatest enemy" is Lex Luthor, who not only hasn't yet appeared in the present-day continuity (he's been relegated to Grant Morrison's Action Comics, which takes place in the past), but is not likely to be killed. In fact, one could argue that killing Luthor would simply cheapen the issue as literally everyone reading it would know he'll be back in time for Man of Steel's release in 2013. That they don't name-drop Luthor makes one wonder whether they're suggesting someone else entirely as Superman's greatest enemy, which of course could be argued at this stage in his development--since all we've seen from the New 52's Superman is a combined three years of stories appearing in his two monthlies and Justice League, there's the outside chance they might develop someone other than Lex as his principal antagonist up to this point, then kill that person for effect--but if that were the choice, it would seem equally cheap and silly, since they clearly would have to be a character created just to kill. That one will be interesting to see play out.

Superman #13 Will Kill...Someone, and Other DC Changes