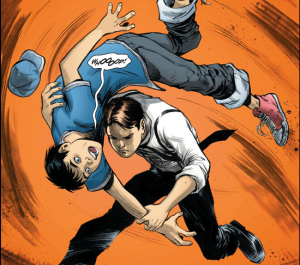 Since the launch of the New 52, there have already been two issues that appeared to depict the first meetings of Superman and Batman. First, of course, was Justice League #1, the book that launched the new DC Universe and saw Batman and Hal Jordan seek out Superman in connection with Darkseid's attack on Earth.

Second came Batman/Superman #1, in which the two met and tangled--but which it's been explained in solicitations will be forgotten by all parties involved so that Justice League #1 makes sense. How they do that hasn't yet been depicted, although this week's Batman/Superman #3 ups the ante a bit, giving us another look at the earliest days of the pair's relationship.

Apparently, Alfred Pennyworth's car broke down while driving through the Midwest and, with young Bruce Wayne in tow, he had to stop for a while in Smallville. The result? A brief meeting between Clark Kent and Bruce Wayne that neither of them seemed to remember years later when they bumped into each other in Batman/Superman #1--but which was a bit of fun to read.

Oh, and Superman fought Batman for the first time as little kids, too, as you can see above.

Superman and Batman Get Another New "First" Meeting