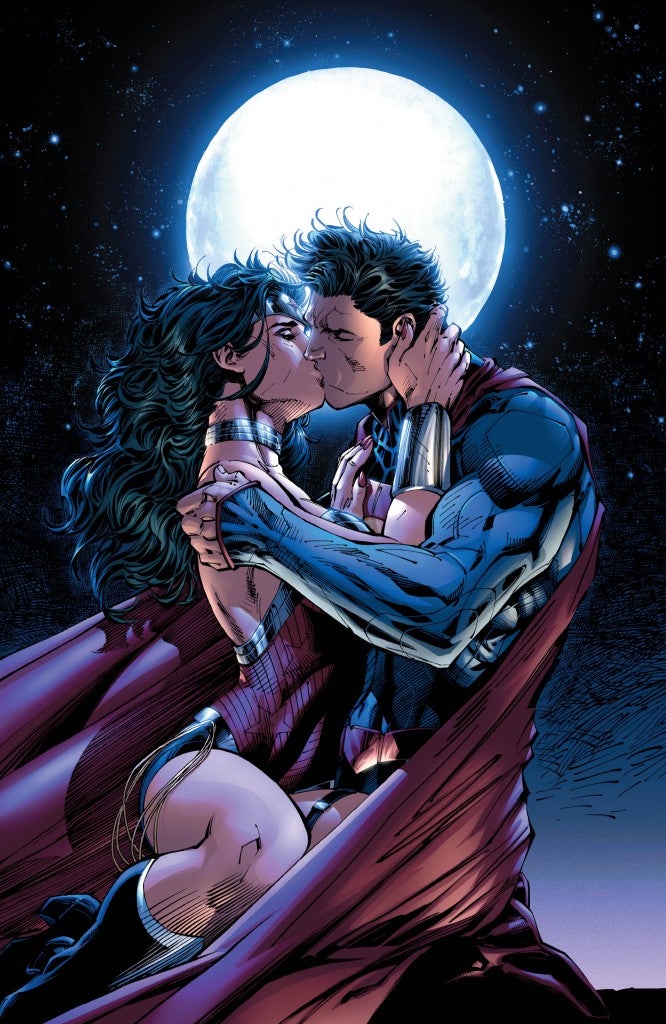 We've seen the cover, but here's the actual image from (presumably) the "shocking" last page of Justice League #12, out Wednesday, which you can find by clicking through to some of the stories on match.com.

The dating site revealed the superheroes' "retired profile pages" earlier today, and also had an analysis of the couple by one of their in-house dating experts.

“Superman and Wonder Woman are a classic match, as a very high testosterone male and a very high estrogen female," said Dr. Helen Fisher in a tongue-in-cheek blog post. "They also have many cultural and biological traits that will fuel their romance. People also tend to fall in love with those of the same background.  Although Superman comes from a different planet, while Wonder Woman harks from an isolated island, both are aliens to our modern world. More important, Superman and Wonder Woman share the same values and goals: They are both dedicated to truth and justice and both fight evil to save the good—traits shared by both the high testosterone and high estrogen type. Lastly, both value independence.”

The image above, though, was tied to a discussion with 1,000 singles about the relative importance of the first kiss and what it can mean for the prospects of a long-term relationship.

According to that conversation, "Even if the first kiss was awful, most singles say that if the date went well, they would go out for a second try. 81.7% of women and 91% of men were happy to take a second chance. Based on this finding, it’s not surprising that a majority of women and men also didn’t feel that a bad first kiss correlates with being bad in bed. Men were more adamant about this distinction, with 80% saying there wasn’t correlation, as opposed to just 65.3% of women."

That first bit is key, since as we've already seen, the famous Superman-Wonder Woman kiss in Action Comics #600 was...well, pretty awkward and embarrassing.