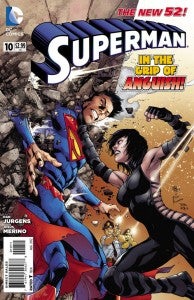 In this week's Superman #10, writer/artist Dan Jurgens loses his co-writer, Keith Giffen, and gains quite a bit of backstory for Anguish, the new villain they co-created together for last month's issue. Coming off of last month's cliffhanger, where an overzealous tabloid journalist manages to convince the owners of the Daily Planet to run a story on their news network alleging that Superman has a secret identity--and that it's the wrong guy--we've got the two plots coming together in deadly fashion as Anguish angered by Superman, decides to take it out on "his" wife and kids...! Dan Jurgens joined ComicBook.com to talk about the issue, and about his impending departure from the title with September's #0. So, no Keith Giffen this issue. It was solicited that way, but I didn't want to ask before the issue hit. Was he always planned to be on only for a few issues? No, as so often happens in comics, that is basically a situation that changed. He had a few other projects come up and is dealing with those. We had to shift gears on the fly but have managed to make it work. That asked, it's now been announced since the last time we talked that you're off Superman effective the zero issue in September, and have nothing solicited that month for the first time since Time Masters: Vanishing Point ended. Can you tell us anything about when you'll be back at the drawing board? Well, there might be a break in terms of solicitations, but there's no real break for me. Even as I'm wrapping up Superman #12, I've already started on the next project, which will be out the following month. It's hard to ignore the fact that both FOX News and MSNBC have network news divisions that are more journalistically-sound than the 24-hour nets that get the ratings. Is that what you were alluding to with the PGN vs. Galaxy News Network or whatever it was here? Yes. It's all about making the most noise and getting people to watch. The question of what is actually broadcast, in terms of fact or good taste, seems to get little consideration. That said, you've always had Clark's career play a bigger role than other creators in the stories, going all the way back the '90s run. What about the Daily Planet do you think informs who Superman is as a character? I've always said that, in many ways, Superman isn't defined by what he DOES do as much as by what he DOESN'T do. That gets into the core of who Clark Kent is, his background, his approach to life, etc. When you write about Clark, you're really writing about Superman. Superman's exploits tell you what he's capable of. Clark tells us who Superman really is. In the end, you call out specifically the "win-at-any costs" corporate "journalism," where as long as you can get traffic for a day, you can always apologize for being wrong tomorrow. To me, that seems as though it's a problem that's been there for years but it's certainly more pronounced now, with the immediacy of the Internet changing the TV news game. Newspapers typically experience that problem less because they're already writing from behind, so it's quality that drives the work more than immediacy more of the time. When you're looking at these issues, do you kind of feel like it's a shame that we've lost The Daily Planet as a newspaper in the world of the New 52? I wouldn't say we've necessarily lost the Daily Planet as a newspaper-- it's just morphed a bit into something different. But I still think it should be the mirror of truth by which we see the rest of the DCU. 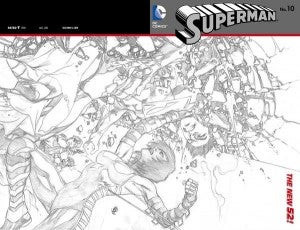 Your first specific reference to what's going on in Action Comics! Do you think that George, then you, then Scott Lobdell, were ideal choices for this title because you worked on big "family" titles during the '90s when you had to play ball and coordinate with people more than most writers do now? I can't comment on George and Scott, other than to say they both do great work and are great pals, but I've always said that when I was working on the Superman titles the first time around, that we were indulged in the most cooperative experiment in comics. It was a long running weekly book in a lot of ways, and I think we generally did well. So, whether it was that, my time on Spidey, the JLA or even Zero Hour, I seem to have been able to share the toys in the sandbox fairly well. There's a throwaway line in here where Jimmy says something about how being Superman puts a target on your wife, and Superman says, "Exactly" as he flies off. Should we read into that, maybe that played a role in Clark and Lois' past? No… more that Superman is commenting on the fact that Jimmy just perfectly identified the problem. Is it just me, or is Vic Barnes positioned perfectly to be Venom? Vic Barnes is positioned to have future stories told, that's for sure. When Anguish trashes the news van, is that the first Action Comics #1 (1938) homage done in the New 52? They've been pretty common over the years, but I've never seen you do one that I can remember. Yep! It surely is. Just having a bit of fun as I wind things down. 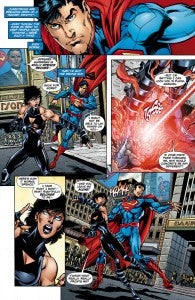 A lot happened in this issue—it's less like the decompressed "moment in time" storytelling that's common in many books and more like an episode of a sitcom, where it might be short but the runtime is still pretty packed. Nevertheless, you've got some splash pages and things, which forces some seven-panel pages and the like in order to get everything in. Is pacing an issue like this a challenge, especially when you have that one great image you want to be sure to get in? At one point I played around with the idea that this easily could have become a 3-part story. In the end, we decided to do it in two. Yes, a lot happened, but I don't consider that a bad thing. Avoiding touching her, but still finding a way to take her out, is a strategy that Superman had to struggle with a bit. You can see growing pains in the beginning of the issue as he starts to get close, but he doesn't really figure out how to solve a problem like Anguish until the end. That's the kind of thing that usually other characters are having to figure out to be a challenge to Supes—did you want to put him through the paces a little bit to show that, yeah, he can figure out how to work when his ring's out of batteries and the web shooters are broken, so to speak? Well, it wasn't so much a problem of trying to defeat Anguish, was it? She wasn't really a major threat to all humanity or anything like that. Frankly, far too many threats and stories are oversold that way. Nor was she really going after Superman. She's someone who is clearly suffering. She needs help. And Superman was trying to do exactly that. It ain't exactly cool in the age of the ass kicking hero, but Superman wanted to help Anguish is an interesting villain; she seems too powerful to just fade away (as she literally does at the end of this story), and obviously it's odd to have a character where you never know the source of their powers. But she seems to have an arc here that would be pretty satisfying to be her beginning and ending as a supervillain. Do you think you'll ever use her again? I'd love to. There's a story waiting to be told-- a fairly tragic one-- but one that adds depth. If not, is that something you're trying out a bit in the New 52? Creating villains that fit the situation and aren't necessarily intended to come back forever? Certainly it's a different approach than most comics take. One of the things Keith and I have often talked about is the need to create new characters, be they heroes, villains, whatever. If you go back in time to the Silver Age, villains were often created to show up once. But, if readers reacted well and sales went up, writers and editors found a way to bring them back. Do so often enough, build something interesting, add to the fabric of the character and pretty soon they might become integral to the book. Creators are holding back now and have been for years. The end result is that you end up reading the same Banana Man (or whatever) story over and over again, with the same general cast. Is there something about Superman that makes this ending work? I feel like for most characters, just "I fixed it. Take what you wanted and go" wouldn't really be a satisfying conclusion, but it works here. I think it did. Not every story has to end with the Hero bashing a villain through a mountain and declaring victory. Others might disagree.

Superman in Flux: Dan Jurgens on Issue 10 and Moving On