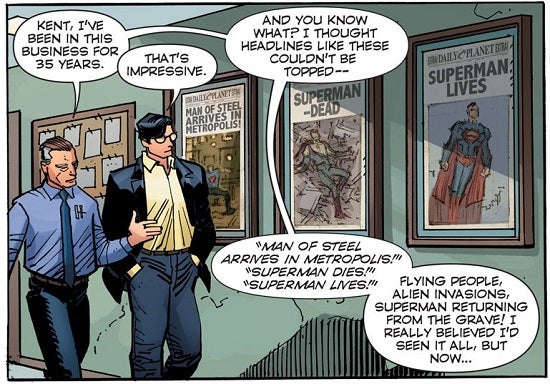 A just-released preview for Geoff Johns and John Romita, Jr.'s first issue on Superman seemingly confirms that not only did Superman die in the New 52's timeline...but when he returned from the dead, he was wearing red trunks on his costume. The Death of Superman storyline is one that has been somewhat confusing since the start of the New 52. As one of the best-selling stories DC has ever printed, the early instinct was for the creators and editors to tell fans and reporters that, yes, Superman had indeed died in the New 52. Later, when a fan asked editor Eddie Berganza to confirm it at a convention, he responded only with a "maybe," and after that some creators hedged their bets, explaining essentially that since the purpose of the New 52 was to divorce themselves from too much cumbersome continuity that it didn't make sense to just declare things as canonical unless the creators involved had an opportunity to actually present them on the page. What nobody has ever indicated is that Superman seemingly wore red trunks at one point in his New 52 history. 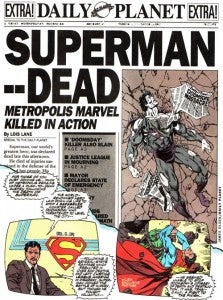 While there has been much fuss from fans about the lack of the trunks, creators and editors have consistently told the same story -- that it was a relic of the '30s which had been kept around out of fidelity to the original source material and that a rebooted universe was the perfect opportunity to update his costume to be somewhat more logical for today. Like it or don't, the explanation has been remarkably consistent since the launch of the New 52 (and, without actually having to agree with it, most people can see the logic in it). You can see pretty clearly, though, that the resurrected New 52 Superman in the "Superman lives" headline above is wearing a costume with red trunks and what looks to be his traditional yellow belt (also never seen in the New 52). The "Superman--Dead" headline is a near-perfect replica of the newspaper as seen in the pre-New 52 continuity, one of the more iconic images of artist Tom Grummett's time on The Adventures of Superman. You can see it at right. At a guess (if there is, in fact, a particular image he was looking at), it seems likely Romita was using the cover to The Adventures of Superman #505  (seen below) as an inspiration. Another enduring Grummett image, this one featured Superman immediately following the events of Superman #82, when he came "back for good," with his powers restored and the last of his enemies vanquished from the Death and Return storylines. That was never a Daily Planet cover image, unless I'm misremembering, but that can be forgiven. 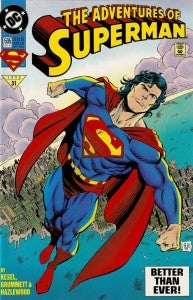 It's also worth noting that, while red trunks did happen, apparently the long-haired Superman did not. Following his resurrection, Superman had long hair (often referred to as his "mullet" look by derisive readers) for a short time, which ended on his wedding day (another event that didn't happen in the New 52). With Doomsday (the monster responsible for killing Superman) coming into the series for a major hurrah just before the arrival of Johns and Romita, Jr., perhaps we'll get clarification on these points before Superman #32 ever arrives on store shelves, and this scene won't be surprising at all. For now, though, it's a cool Easter egg and seemingly implies that there was something very odd going on in the world of the New 52 around the time of Doomsday's first appearance. Arguably the oddest thing about these little Easter eggs is that in the center image (the "Superman -- Dead" headline), Superman appears to be wearing his New 52 costume. The red trunks are nowhere in sight and the boots seem to have a bunch of detailing on them. That makes the red trunks at his resurrection a bit baffling, unless for some reason he was forced to wear a different costume upon returning. Could it be that the red trunks look replaced the "black costume" look as his recovery suit and interim costume? That seems like a stretch. ...Of course, all of this could be just a simple pencil or color error. It wouldn't be the first time, as a minor coloring error brought Superman's trunks back for a panel in Supergirl during the "H'El on Earth" storyline a while back. The colorist later provided fans with a "continuity repair kit," which was basically as funny as it sounds. 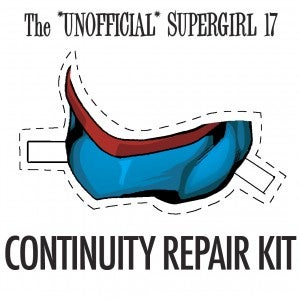 "Ha! Whoops. MY BAD," commented colorist Dave McCaig on our Facebook page at the time, adding, "I blame the vintage Superman statue next to my monitor for leading me astray." "Sorry, internet! Here's a print and paste quick-fix," McCaig added later. ...Maybe keep that handy, just in case.

Superman Preview Shows Red Trunks, The Death of Superman Happened in the New 52