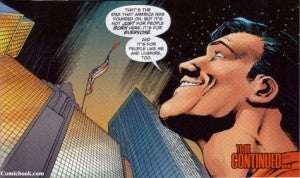 It was just a couple weeks ago in Action Comics #900 that Superman was threatening to renounce his U.S. citizenship, but now Superman seems to have quickly changed his tune. In Superman #711, which was just released in comic book shops today, Superman expresses his appreciation for the American way while staring admiringly at the American flag.

In the Action Comics issue that started all the controversy, Superman said, "Truth, justice, and the American way – It's not enough anymore." But in Superman #711, the American way appears to be looking a whole lot better.

Spoiler warning: In the story, Superman battles a supervillain called Livewire. Livewire is capable of turning into pure energy, and because her energy levels are fluctuating, it has made her brain a little loopy. Superman uses a containment suit to defeat Livewire, which also helps to return her to her senses. As Livewire is being taken away to jail, Superman agrees to put in a good word for her.

When Superman's pal Jimmy Olsen asks Superman why he would stick up for someone who hates him, Superman says "We've all made mistakes. And everybody deserves a second chance." Superman continues, "That's what America is about, really. That's the American way. Life, liberty, the pursuit of happiness—and second chances. None of us are forced to be anything we don't want to be." 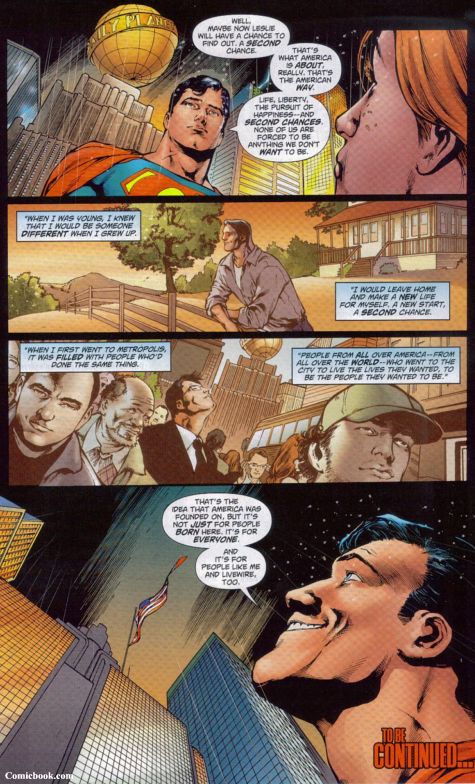 After recalling his youth and how leaving home gave him a second chance, Superman adds, "That's the idea that America was founded on, but it's not just for people born here. It's for everyone. And it's for people like me and Livewire, too."

While this story was likely finished well before the Action #900 controversy erupted, it certainly reads as a way of addressing the controversy. It's almost like Superman is admitting he made a mistake and is asking for a second chance by professing his love for the American way. Superman's statement about the American way does appear on the very last page of the story, so it's possible that it was something added at the last minute. Could this be something that DC Comics purposefully added to the story as a way to address the controversy? Or is it just an amazing coincidence?

Superman Returns To The American Way