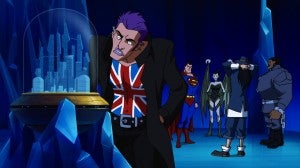 Like every other comic book fan with a pulse in early 2001, I loved Joe Kelly, Doug Mahnke and Lee Bermejo's classic Superman tale "What's So Funny About Truth, Justice and the American Way?". It was a rumination on what makes Superman special that's been paralleled only once or twice before, and a chance for the writers of DC's longest-standing icon to stand their hero up against the likes of The Authority/Stormwatch, who essentially argued that the traditional model of superheroes--the reactive model that Superman represents--should be a thing of the past, replaced by proactive "crime fighters" less concerned with justice than results.

In a single, oversized issue, Kelly introduced and resolved the conflict, with Mahnke and Bermejo providing some impressive and haunting visuals along the way. It's no wonder it's widely regarded as one of the great Superman stories since the Crisis on Infinite Earths. And coming, as it did, in the middle of a period where Superman and Action Comics weren't impressing much of anyone, the indisputable success of the issue carried even more weight.

So when Kelly and his Man of Action friends were tapped to adapt the story into a 70-minute, PG-13-rated feature film for Warner Premier's direct-to-video/video-on-demand DC Universe series, I was as excited as anybody else. Now that I've seen Superman vs. The Elite, though, I have to admit that it might be a bit too much of a good thing.

While the third act of the story--wherein Superman actually deals with the problem of The Elite--is as strong as anything we've seen from DC's animated feature line, there seems to be an awful lot of padding in the film. It's not surprising when you consider that even an oversized comic book is still only about sixty (comic book) pages, and not likely to fill a feature film, even if the "feature length" part is a paltry 74 minutes. 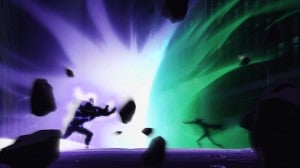 The movie is not without considerable appeal; it's stylishly directed by Michael Chang, from whom I'd like to see a lot more after the impressive way he handled this film; the use of classic Superman animation in the opening credits, as well as the way that he played with some of the tropes of children's animation for a few key scenes in the film, was creative and enjoyable.

The fight choreography is terrific, making great use of super powers all around, from Superman to The Elite to Atomic Skull...and the script is mostly quite good, especially Superman's parts. It's arguably the first time, in comics or animation, that I've seen Atomic Skull actually seem to present a threat to anyone or a challenge to Superman. He can be lumped in with Metallo and Parasite, as far as I'm concerned, as villains who exist mostly to make Superman look good and establish a scene. Even here, using his powers effectively and proving key to the overall plot, Atomic Skull has no discernible personality; what I remember of him from the comics is gone, replaced by what is essentially a kill-crazed O.M.A.C.

There are also some fun bonus bits that you get just from being in the DC Universe; when they enter a war zone, it quickly deteriorates into a Japanese monster movie because in the context of this world, a country with a "bio weapons" program is developing giant spiders with head-mounted lasers.

Another cinematic goody that you get out of this movie is the moment where Manchester Black crosses the moral event horizon; while the viewer is meant to side with Superman on the issue, the action that The Elite takes is somewhat satisfying to watch. It's a moment that forces the viewer to examine themselves and their own reactions to violence just a little--which is obviously what Superman is trying to do to the people watching everything unfold in Metropolis later on. The idea that you get a little emotional charge out of watching a character killed, and then you sit and judge characters in the film for doing the same thing, is a clever little bit of filmmaking, provided it's done on purpose. 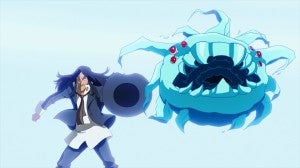 Oh, and Superman's "Captain America speech" is terrific. George Newbern, returning to the role after his years in the DC Animated Universe, nails it.

Where does the film fall apart a little, then? Well, one place to start is with the performance of Pauley Perrette, the NCIS star who has been a centerpiece of Warner's marketing for the film. She plays Lois Lane and just never seems to find her groove. While Newbern returns to form and Robin Atkin Downes, who plays Manchester Black, knocks it out of the park, Lois is the third major role in the film and about half of her lines are delivered just terribly. This falls on the director a bit, but the bubbly, acerbic Perrette seems to have put a little too much of herself into the role and not stopped to consider what the part actually demands.

In the early stages of the film, Lois has some of the only truly poor writing, in terms of silly and didactic lines--so it's easy to listen to Perrette, find her delivery a little bit grating, but allow the blame to fall back on the writer. It seems, for a while, that the same bubbly, silly energy that makes her feel wrong for Lois also imbues the boring dialogue with some life. Ultimately, though, she just never sounds like she's taking it seriously enough. Is Perrette having fun behind the mike? Maybe that's it--and that's great...except that Lois is, in the context of this story, spending a lot of the time having Very Serious Conversations with her fiance. Perrette's squeaky, ever-happy chipmunk voice doesn't sound right when she's cursing at Clark for, she thinks, heading off to a pointless death. That early benefit of the doubt dissolves over time, leaving a female lead who's just annoying every time she opens her mouth.

While shot choices, choreography, pacing and the like speak very well of director Chang, there are some areas where either he or someone on his end dropped the ball, too. The music is totally uninspired. It's not bad, exactly, but it's certainly not great, and Superman films have a long history of great music, from 1978 all the way up through All-Star Superman. It's not only pedestrian, but it sounds almost exactly like what you might hear on Justice League Unlimited, which undercuts the "epic" feel of doing one of these features. The Justice League Unlimited episode based on the Alan Moore Superman one-shot "For the Man Who Has Everything" feels just as epic as this film does, and doesn't suffer from being half again as long as the comic. 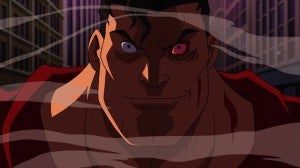 The character designs are similarly bland, having converted the moody and gritty take on the characters provided by visually-distinctive artists like Mahnke, Bermejo and cover artist Tim Bradstreet and essentially taking away from them only as much as a caricature artist in Central Park might. Superman's got ears big enough to give Alfred E. Newman a run for his money and a spit-curl that swoops up and back down again like Egon's from The Real Ghostbusters, after which he seems to be basically the same design sheet as any other super-type.

Manchester Black is similarly ugly, but unremarkable, with a matchstick constantly hanging from his mouth becuase apparently even in a PG-13 movie, a character who is clearly the bad guy cannot smoke. The designs feel mailed in, and it cheapens a good script. It's only Chang's creativity in other areas that overcome the twin problems of the design and the music which, taken together, really seem to be conspiring to make the whole thing mediocre.

Speaking of the PG-13 rating, by the way: this could be the first of the DC Animated movies where it feels actually justified. There's a fair amount of blood, quite a bit of hardcore tension in the third act and more swearing and sexual innuendo on display here than in any of a half-dozen other DC Universe animated movies combined.

There are also some pretty cringe-inducing attempts to be cool and play to a younger audience: Clark claims to be tweeting back and forth with Superman? Ugh. A "There's an app for that" joke from Lois when Manchester Black explains interdimensional travel/teleportation? Double ugh. Luckily, these and a couple of others like them are throwaway lines easily forgotten by the next scene.

In the end, more than anything else, this film makes me long for the Kingdom Come movie that DC animators have said over and over again will never be. It touches on so many of the same themes, but does it perhaps a little too ham-fistedly...and being set in the modern day means that when Superman "goes nuclear" at the end, it's a deeply unsettling scene in a way that, say, his freakout at the UN toward the end of Kingdom Come is not (becuase he's not "our" Superman, per se). Superman vs. The Elite is a good movie--like 3 1/2 stars out of 5 or something--but "What's So Funny..." deserved a great movie like All-Star Superman got. It almost seems as though it would have been better to try and cram the third act and a little setup into a short film, as there's so much in the first two-thirds of the film that just feels redundant.