Superman #9, out yesterday from DC Comics, saw the introduction of a new villain in Anguish (whose solicited name was Masochist and whose solicited appearance changed substantially, like the issue's title) as well as a few potentially hairy subplots; first of all, Superman rescues a damaged Russian submarine, only to have the crew meet him with steely glares and disdain. It's clear both to the reader and to Superman that something is going on with the sub, but he can't stay in international waters and cause a crisis trying to find out what. At the same time, an impetuous blogger appears to have sussed out Superman's secret identity--something that will likely cause no end of headaches for the guy across the street from Clark Kent's office. As usual, co-writer/artist Dan Jurgens joined us to talk about the issue. 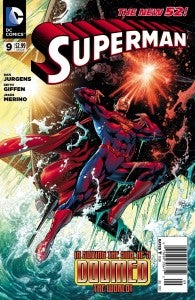 This issue starts out with a Superman who looks more like the Dan Jurgens Superman of old--the spit-curl is a little more pronounced and there's more lines on the face. It returns to normal pretty quickly, but those first few pages look like, in general, either you or Jesus handled them a little differently. Is that just my imagination?

May have looked more pronounced as we saw Superman underwater, where his hair was moving all over. By the end it's clearly down on his face more, in keeping with the new look. Between this and the space station in Smallville #1, Superman is spending more time with Russians than he probably has in years! Crazy coincidence. But that's what happens when you get around as much as Superman does. Do these guys realize that Superman can probably hear them talking about how he "can't know"? In general, I like to think the average Joe-- or Ivan-- on the street doesn't know the details of Superman's powers. Yes, they know he's strong and can fly. But hearing powers are something different. It's sort of like knowing a star pitcher wins a lot of games, but isn't aware of his specific record or ERA. It's been a while (probably since that first Jeph Loeb arc) that Superman's secret identity has been a major cause for consternation; in the pre-reboot DC Universe they seemed pretty comfortable with the idea that he didn't use one. Did you want to kind of take that comfort zone away from Superman in the new world? You'll have to wait until we get to the end of the story, but the basic idea here is that people speculate about all sorts of things when it comes to Superman. My gosh-- many people seem unable to grasp where our President was born. Can you imagine what would be said if we had a Superman in our world? Is there just one? Two? More? Maybe he's an army of robots? The international intrigue here seems like it could be a good time for Superman to reach out to his friends in the Justice League International--unfortunately, their Russian membership is somewhat thin at present. Was that intentional or just a coincidence? Mostly coincidence. Russian subs have a history of accidents so it fit the needs of the story well. That guy at the bank had two blood splashes, neither of which is in the spot where he was shot. Is there somethign to that in terms of how our villain's powers work, or is that just a miscommunication with the letterer and there should have been more than one shot? There should've been more than one sound effect. These things happen. On that note--that cop WAS pretty trigger-happy. Is this just one of those things where metahumans get treated a little differently from regular perps? I don't think it's a question of being treated differently. In a world of metas, they're considered armed and dangerous even if they don't have a weapon in their hands. How does Barnes know about the sub? Just from media reports of it being in danger earlier or is there somethign more nefarious at play? Media reports. Ironically, as we saw last issue, Superman no longer needs super-speed to get "squared away" in the blink of an eye. Will Barnes' investigation play a role in the promised reveal of the costume's secrets? Future issues will have to answer that question! Superman getting manhandled by a teenage girl is one of those cover images that can elicit a couple of snickers, but really it's a matter of giving him a threat, isn't it? Someone besides Parasite and Doomsday who can actually fight him with her fists? Superman has always suffered from a lack of physical villains. It's always been something for writers to overcome. Is she always this strong, by the way, or is it one of those things like the old Electric Blue Superman where he could "eat" the energy from your punches or blasts and redirect it, using your own strength against you? We delve into the nature of Anguish's powers more next issue. 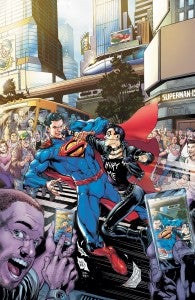 What caused the name change from Masochist to Anguish? Or is it the other way around and we'll see her get the solicited name next issue?

As Keith and I got into the nuts and bolts of the story, Anguish seemed a better fit. That influenced the cover change as well. A couple of things on Spence Becker: First, didn't I buy a Booster Gold page from him once? As the legal wording says, "The stories, characters and incidents mentioned in this magazine are entirely fictional." And second, how did he get so close in tracking down Supes? Clark go in the window while that poor guy was just walking in the alley? Again, Victor Barnes' methodology will be explained in #10! ...And what are the odds of Becker's daughter being with Superman at the time? Is there something at play here between the Russians, Becker and his Barnes? Hmm... something of a natural, wouldn't you say?