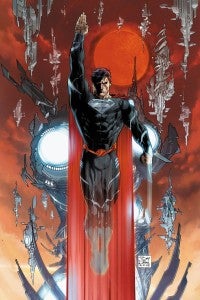 DC Comics has announced Andy Diggle and Tony Daniel as the creative team who will follow the departing Grant Morrison and Rags Morales on the best-selling Superman title, Action Comics. Daniel provided the piece of promotional art at right, which features Superman with yet another new look--the one that we saw Kenneth Rocafort briefly tackle in Superman #0 last month. The costume, which looks to be a New 52 reinvention of the suit Superman wore in the "regeneration matrix" after he was killed by Doomsday, will apparently make its first appearance in the modern day continuity (or at least the Action Comics timeline, which has been set five years in the past) as the new team takes over. It seems that either Morrison and Morales will stay on for a month longer than previously stated, or DC will have a fill-in issue between the two teams, as an entry at DC's blog seems to peg the first issue for the new team as Action Comics #18 in March. Morrison had previously said that he would leave the title after #16's release. 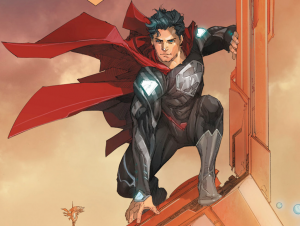 "I've always had a positive experience working with DC Comics, and it's amazing to be welcomed back into the fold in such fine style," Diggle said. "Even in an industry dominated by superheroes, Superman is THE superhero – the original and best - and I'm flattered, daunted and inspired in equal measure at being given the opportunity to build on such an incredible and historic legacy. The word 'iconic' is bandied around a lot in comics, but Superman defines the term. I'm excited to be working with Tony Daniel, whose artistic and storytelling skills will be bringing the world(s) of Superman to stunning visual life. Together we'll be carving out spectacular new adventures that respect the past while redefining the future of the Man of Steel." Daniel appears to be holding true to rumors that he would take some time off from writing, after having recently penned most of the work he'd been drawing, including a stint on Detective Comics. "First, let me say that I am really excited to be working with Andy Diggle on Actom Comics," said Daniel. "Superman is a character I've wanted to work on for quite a while now and I'm now very fortunate to be given this tremendous opportunity to work with such an iconic character. I look forward to drawing each and every character in Superman's universe. I anticipate this being a fun ride for me and hopefully for Superman fans as well. I can't wait to get Andy's first script and sharpening my pencils! Thank you everyone for your support of my work on Batman and Detective Comics over the years. I already miss the Dark Knight, but I look forward to starting anew with the Man of Steel in Action Comics. I hope to see you all in Metropolis!"