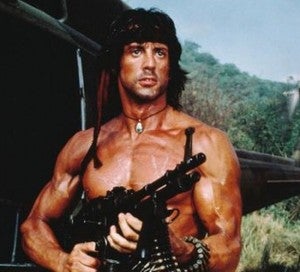 Reports yesterday that Sylvester Stallone was considering a move to television to star as John Rambo in a small-screen adaptation of the iconic Vietnam veteran Stallone has portrayed in four feature films are simply not true, according to a representative for the star.

Following up on yesterday's blockbuster news, The Hollywood Reporter quoted one of Sly's people as saying, "While a television series based on the Rambo property is in development with Entertainment One and Nu Image, contrary to reports, Sylvester Stallone will certainly not reprise his role as the iconic John Rambo for the small screen. He himself will not portray the character in the series."

Given Stallone's history as a writer and director, one assumes he'll have input into the show should it go forward, if for no other reason than to keep his brand relatively untarnished.

"I'm happy to be partnering with a prolific company like Entertainment One who has a track record of creating high-quality programming for their broadcast partners around the world,” Avi Lerner of Nu Image said yesterday. "And I'm excited by the prospect of collaborating again with my good friend Sly for an encore in this next phase of the Rambo legacy."

Sylvester Stallone Will Not Star in Rambo TV Series