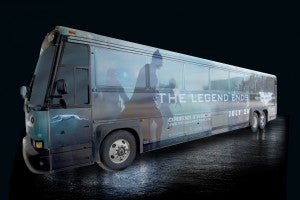 The Greyhound bus service is sponsoring a contest beginning this week (and running through early August) that will give one winner and a companion an opportunity to take a free trip to New York City and live it up Bruce Wayne-style, billing it to the Greyhound tab.

“Elevating the typical travel experience is what Greyhound proudly offers every day, so we’re pleased to offer Batman fans a chance to live like a billionaire in partnership with Warner Bros. Studios,” said Dave Leach, president and CEO, Greyhound Lines, Inc., in a press release. “Although there will only be one winner, everyone can travel in style and enjoy great service when they ride our new fleet of buses, which offer express routes between major cities and luxurious amenities — such as Wi-Fi, leather seats and extra legroom — typically found on more expensive travel options.”

You won't have to take the bus to get there, though; according to the release, Greyhound will offer the contest winners "roundtrip airfare for two to New York City, limousine service on a custom Greyhound VIP coach between the airport and hotel, a three-night hotel stay at a four-star or higher hotel, a sunset champagne helicopter tour over Manhattan and dinner at the three Michelin-starred Jean-Georges restaurant." It's a prize package that the contest website values at $5,000.

While they certainly want to cast off the reputation that buses have for being uncomfortable and unpleasant experiences, it's likely that Greyhound knew that "living in luxury" by taking a bus cross country was the kind of reward that would just bait late night comedians.

The contest winners will be informed in early September, nearly two months after The Dark Knight Rises hits theaters on July 20.