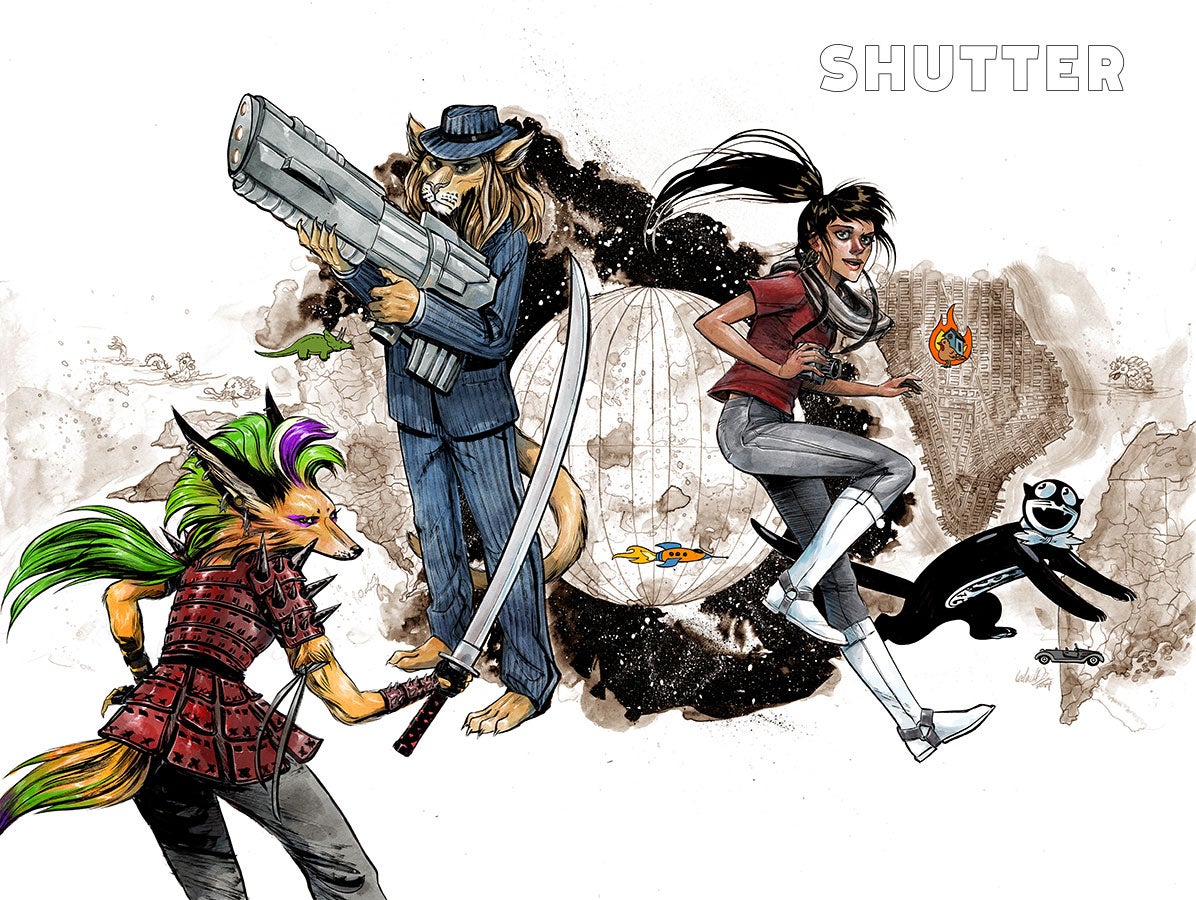 I was literally talking to a friend of mine the day before January's Image Expo wondering why more people aren't doing new updated takes on Indiana Jones/Tomb Raider style adventure comics. Then Image Expo came, and boom, Joe Keatinge and Leila Del Duca announced that they would be doing exactly that in Shutter.

Now it is almost one year later and Shutter's first arc is wrapped, with a trade paperback collection just around the corner, and the book is exactly what I was looking for and so much more. If you haven't checked it out, give it a try. The $10 first collection is released November 12th.

I had a nice chat with Joe and Leila about all things Shutter, including what's next, and what their process is for bringing such a vibrant, and exciting world of the unexpected to life.

So Joe, I read elsewhere in interviews with you that in Shutter you wanted to create a new kind of epic explorer character for the modern 20teens era. The first arc was a lot about her exploring her family and its own kind of hidden history. I'm curious why you chose a family based story for the first arc rather than a more typical adventure/explorer story for an adventurer comic?

Joe Keatinge: I don't get why anyone would do anything "typical" these days, especially when published by Image Comics, where you can do whatever the heck you want. The themes explored in Shutter and how they're conveyed is reflective of our creative team, what we've experienced, what's in our souls. Further, you can already read Tintin and Uncle Scrooge or watch Indiana Jones and Lawrence of Arabia. Why be a cover band at a publisher allowing us to have our own visions out there? We don't have interest in riffing on yesterday, we'd like to build something for tomorrow.

Shutter has a nice European comics sensibility both in its tone and focus, and I'm curious, are there are any european comics in particular that may have found their way into the DNA of Shutter?

JK: Eurocomics have found their way into my DNA and so the book's DNA for sure, but it's more diverse than that. It's an overall fascination with explorers both fictional and otherwise, in Eurocomics and reality. For instance, I've been doing a lot of research lately into travel in the late 1800s and it's fascinating to read someone like John Lawson Stoddard write about Norway as if he's discovering Skull Island, discussing so commonly known today as if he's unearthed some unknown civilization. He's made me appreciate fjords like I never have before. That's one thing that's driving the book more than anything else — really appreciating so much that we take for granted now. Appreciating how fantastic the world we know is and, further, how much of our existence we have yet to understand.

Will we ever get to see the broader world of Shutter where we might see where some of these amazing people-creatures come from?

Leila Del Duca: Probably not. Shutter is more about Kate's journey and the immediate surrounding cast. It's not as important to us to expand on very minor characters when there's so much of Kate's story we still have to tell.  Also, we love leaving questions like origin stories unanswered because it allows our readers to wonder more and forces them to create their own philosophies on certain character's back stories. 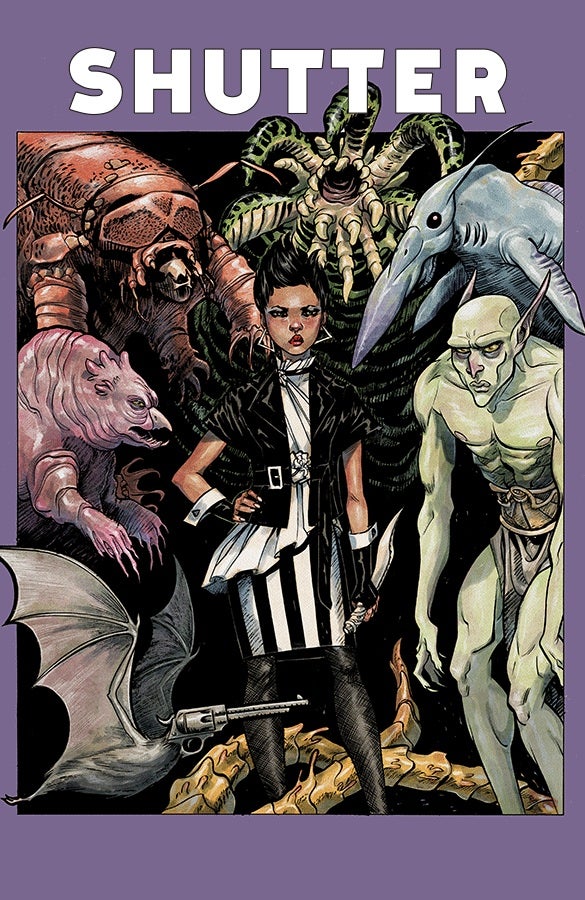 Joe, do you write full script? Do you have a big outline for the full story?

JK: I do write full script in a good amount of detail, but not to an overbearing degree. You've got to trust your collaborators to do their job. So, I will mention to Leila — for instance — I think the cop should be a grizzly bear or the nurse should have a pumpkin-head, but I can't draw for shit so I'm not going to dictate to her how it should be done.

I've created this overall map of where everything's planned to go in the form of an extremely huge spreadsheet, breaking it down pretty much issue-by-issue, but it's just that — a map. I know where we start and I've written the last three pages of whatever issue number the last issue will be, but we may get there faster than planned or longer than foreseen, maybe going the exact route or taking detours or skipping things we no longer feel are relevant to the story we're telling. Any time there's a mystery, I know how it's resolved, but other than that, we're addicted to the freedom Image affords creators and utilize it.

Leila, tell us about your process. Do you work on paper or are you fully digital? What materials/tools do you like to use for Shutter?

LDD: I'm a fully traditional artist, but I'll do minor fixes in Photoshop after the final pages are scanned. I pencil with a drafting pencil, 2h lead, and ink mostly with a Raphael Kolinsky sable brush, size 1. Sometimes I'll use a rapidiograph or crow quill for certain line effects.

My process is quite typical. I read through the script a couple times, talk to Joe about any concerns or confusions, then I spend a couple days doing layouts. After Joe and I have another conversation about those, I try to pencil and ink a page a day. I usually work 6 days a week, though I always try to do all my work in just 5 days. I'm quite a slacker sometimes and let sleep deprivation, stress, and the internet get in the way of my productivity all too often. But when I stay on task, I can pencil and ink a page in a day, plus some. After I scan and edit final inks, I send them off to Owen to work his magic!

Leila, I'd love to hear about your brainstorming process for setting up these absolutely gorgeous pages you've been making. Say you get a script from Joe and you read through it. What normally goes through your mind as you start thinking about the pages?

LDD: What normally goes through my mind is astonishment and wonder! Joe comes up with the coolest imagery for me to draw. That said, it takes a lot of brain energy to wrap my mind around the visual and emotional concepts Joe writes. I like to spend a lot of time THINKING about the script and imagining the actions in my head before I even start sketching on paper. I'll read the script twice, the second time scouring the internet for reference. There's often a lot of things I've never drawn before, so this time is spent studying and mentally preparing myself for the challenge of drawing lots of new imagery.

Then I start drawing layouts, reading and rereading each page, sketching different angles and actions until I come to a visual understanding of how best to tell the story. I've made layout print-outs that are basically an 8.5 x 11 inch page divided into four boxes that are set to the dimensions of an 11 x 17 inch comic book page. I spend a couple days drawing those, taking lot's of breaks since it's such exhausting work. This is the time where I look at my comic book influences (mostly Sean Murphy and Mark Shultz) to get layout and storytelling ideas when I'm having troubles figuring a page out. By the end of the layouts stage, I'm uncontrollably excited to start drawing the final pages after doing the hardest part of the my process. 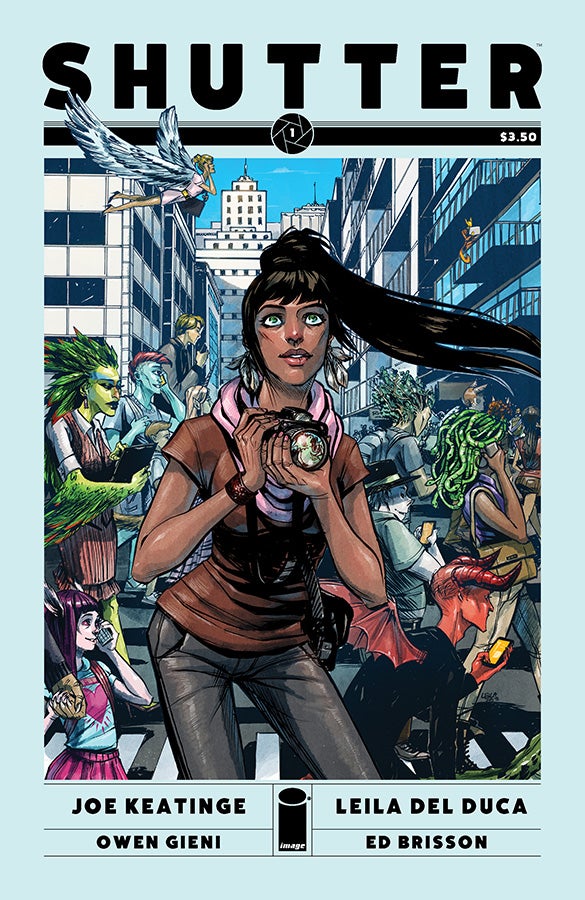 Finally, tell us a little bit about what you two are reading/listening/watching these days? I love that you two tell us in the Shutter backmatter, so while we're going through this little break in the book until the next arc, tell us what's been really exciting you?

JK: We're both blowing through Downton Abbey — Leila for the first time and me the second time around — and have crossed the threshold into season 4. It's a fascinating chess game of mannerisms and tradition versus evolution and truth. I generally don't have any present interest in doing a licensed TV show book, but man, I'd be down for some Downton Abbey comics.

Book wise I'm always all over the place. It's difficult pinpointing just one in the back of the letters column. Right now I've got a book about silent movies written in 1965, the rest of those Stoddard travelogues I mentioned, the tail-end of John le Carré's A Delicate Truth and just cracked open Moby Dick. I've attempted it in the past, but never made it to the end, so I'm aiming to see it through this time around. The new Murakami is staring me down from my shelf, asking why I brought it into my life and let it sit.

There's been some great comics out lately too. I've been singing the praises of Farel Dalrymple's Wrenchies for a while here, but I just read Roman Muradov's (In A Sense) Lost & Found from Nobrow and… man. That guy's going to be huge. I suppose there's a little bias because he's a friend and contributed to Glory, but I am fascinated with his work. He hits a lot of notes for me no one else is attempting. I even dug his Penguin Deluxe Edition cover of James Joyce's Dubliners. Very talented guy, that Roman Muradov.

Music I'm in a bit of a funk. I've been listening to a lot of the same shit lately because it's what I work to and my casual listening time has been going through Dan Carlin's Hardcore History of World War I, which is already close to 15 hours long, so it's dominating. I've got tickets to see the New Pornographers soon though, so I'm pretty excited about that.

LDD: Yeah, working my way through Downton Abbey has been great! I also started watching Bojack Horseman and that's been a hoot. I'm very excited about Lisa Hanawalt's art direction and the humor is pretty hilarious. I'm also embarrassed to admit I like watching Korean dramas. I recently finished watching Coffee Prince and City Hall and hated/loved them. *shakes head in shame*

Comics-wise, I also agree with Joe about The Wrenchies. It's one of my favorite comics of all time and I'm super impressed with Dalrymple's story. I also caught up with the Invincible Ultimate Collections and Hellboy. Now that I live in Portland, Oregon, Joe's been kind enough to let me regularly borrow his comics and I've picked up and loved Empowered, The Incal, Blueberry, Tech Jacket, I Kill Giants, The Mourning Star...and tons of other gems.

For books, I'm in the middle of Murakami's "Norwegian Wood" after someone mentioned the movie was based on this book. I can already tell this writer's going to have a recurring place on my shelf. I also recently read Smashing Laptops by Josh Wagner, which was an excellent farewell to my previous residence of Missoula, Montana, since the book takes place there.

Musically I haven't been listening to much since I've needed quiet brain time as of late. When I do want sound, I've been listening to The Shins, Lykki Li, Man Man, J. Sherri, Dear Rabbit, and Carrie Nation and the Speakeasy. Anyone who has great suggestions in the vaudeville, cabaret, freak folk, acoustic waltzy sad old bastard Tom Waits genre, please send suggestions to shuttercomics@gmail.com.