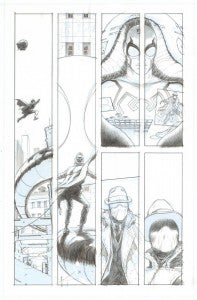 Once upon a time, DC Comics bought a bunch of characters from Charlton and the story that came of it was somewhat popular. You may have heard of Watchmen? I think there was a movie.

In any case, the first art from Grant Morrison's long-awaited DC miniseries Multiversity has just been released to the DC blog, and it features a couple of those characters--Vic Sage, The Question (a version of whom was just seen in the final panels of Justice League #0) and Ted Kord, the Blue Beetle.

That's right, folks--Ted Kord exists in the DC Multiverse, and he will be seen, at the latest, in the first issue of Morrison's Multiversity, titled Pax Americana and featuring art by Frank Quitely.

Pax Americana will be, according to the DC blog, the first in "an 8-issue series comprising 6 one-shots and a two-part conclusion with each issue featuring a 38-page lead story followed by an 8-page backup. Each issue takes place on a different parallel world from the main DC Earth and functions as a number one issue. Each world in the Multiverse publishes comic books about the heroes on the OTHER worlds. Once the characters realize this, they then unite to respond to the villains!"

Ted Kord was last seen (alive) in the Prelude to Infinite Crisis, when he was murdered by his longtime friend and associate Maxwell Lord. Since then, his return has been teased, and readers have seen him come back a few times via time-travel in Booster Gold, once via cloning in Manhunter and once as a death-worshiping zombie in Blackest Night. In the world of the New 52, DC's co-publisher Dan DiDio stirred up some fan anger by telling his Facebook readers that Kord "never existed."