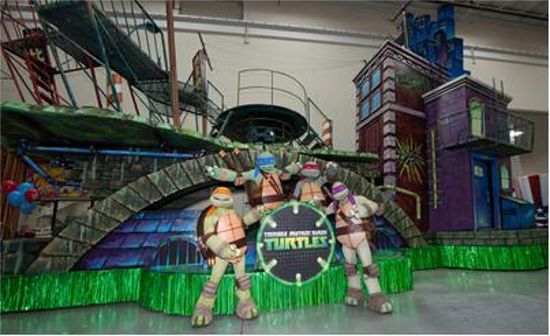 Comic book fans watching the 86th Annual Macy's Thanksgiving Day Parade this morning should keep their eyes open for a brand new float. The Teenage Mutant Ninja Turtles float will be making its first appearance ever in the parade. "Nickelodeon's collaboration with Macy's Thanksgiving Day Parade has become a tradition and we're thrilled to be introducing the new Teenage Mutant Ninja Turtle float in the Parade this year," said Pam Kaufman, who is Chief Marketing Officer of Nickelodeon/MTVN Kids and Family Group. "Sitting down year after year to watch the Parade as a family is a Thanksgiving Day ritual for millions across the country as preschoolers, tweens, teens and parents enjoy seeing Nickelodeon's stars and characters marching in this great event." Nickelodeon's Teenage Mutant Ninja Turtles float will feature Leonardo, Donatello, Raphael and Michelangelo. The float was designed by the artists of Macy's Parade Studio, and it includes a spectacular dark cityscape including roof tops, fire escapes, window ledges and a zip line down telephone wires. In addition to the Turtles, rockers Neon Trees will be singing their top 5 smash "Everybody Talks" on the float.