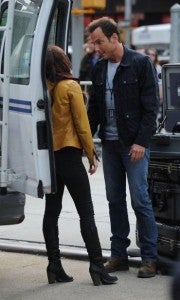 After a number of set photos have leaked in the last couple of days, photos taken by scoopers at Superhero Hype have revealed that Will Arnett will play April O'Neil's cameraman, Vernon Fenwick.

The fact that he's been seen on-set with her while she's doing her news reports made it seem pretty obvious, but yesterday SHH got a shot close enough to make out "on Fenwi" on Arnett's prop press badge.

In the animated series, Fenwick is often depicted as ambitious, selfish and cowardly. He's been known to attempt to steal April's stories. Shortly after Arnett was announced, there was some speculation that he would play a major role, especially with Splinter and Shredder not yet cast at the time--but Fenwick certainly seems right in his wheelhouse.