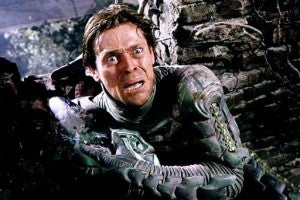 Willem Dafoe, the John Carter and Boondock Saints star best known to comic book fans as Norman Osborn/The Green Goblin in Sam Raimi’s Spider-Man trilogy, told Empire Magazine that he’s “shocked” by what appears to be similarities between the reboot (which he admits he hasn’t seen) and Raimi’s films.

“I think it’s hard to beat the charm, the naïve charm, of the first one,” Dafoe told the magazine. “There’s never really any way of going back.”

The actor called it “surprising” that the reboot was “another version of exactly the same story,” which of course is not entirely accurate. Even that impression from seeing trailers and the like is a bit vexing, given that most of the early advertising for The Amazing Spider-Man revolved around the mystery of Peter’s parents, which was of course non-existent in the trio of films Dafoe starred in.

Green Goblin didn’t appear in The Amazing Spider-Man, so as yet, Dafoe hasn’t been recast.  Other major players from the initial films who have yet to appear are Mary Jane Watson, Peter’s love interest from the Raimi films and eventually his wife in the comics—and J. Jonah Jameson, Peter’s boss at the Daily Bugle. There have been reports that character actor J.K. Simmons was slated to return as J.J. J. until the character was cut from the film.

It's worth noting that Dafoe also took time in the interview to stand up for John Carter, the failure of which he laid at the feet of marketing and promotion. Missing out on both the John Carter sequel he says he hoped to make as well as continuing his legacy of Osborniness in the Spider-films probably feels like a bit of a double-whammy this year.